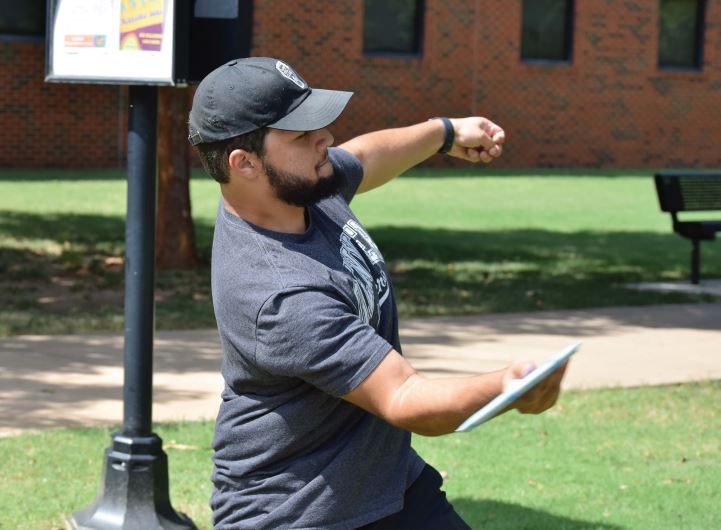 Every semester, Cameron University faculty and staff devotes time to spice up student activities by incorporating ways to include games and hands-on activities at the school.
Cameron’s new and improved Disc Golf course comes with 18 full-sized holes, as well as a redesigned path to make for a new game experience and allow students to be more involved on campus.

Along with the new course, Cameron has started to offer Disc Golf as a credited class, with the first ever installment of the new course taking place this fall semester.

Dr. Gregory Hoepfner, music professor and disc golf enthusiast, remembers when Cameron first built the old course, and believes his familiarity with the game led him to the title of “Disc Golf instructor.”

“I remember the day they built it, and I was all excited,” Hoephner said.

Hoepfner is very pleased with the turn-out so far, and plans to make the next few weeks of the class more competitive for the students who want to be involved in a more tournament-based style of play.

“This is a pilot and right now we have a lot of students,” Hophner said. “We’re kinda almost conjested here. They have to go out in squads of 4 to keep it moving along. As
the semester goes along, I hope to have some mini tournamnets and the ones that want to, compete against each other.”

Sophomore Curtis Myers believes he made the right choice taking this course as he finds more time to go outside of class and play, as opposed to something he would have dreaded for a whole semester.

“It would be fun instead of doing a basic P.E. credit. I am obsessed with disc golf now, it’s my new favorite hobby,” Myers said.

He never knew exactly how to navigate his way around the full course.

“I was not aware of any other course besides the one on campus. However, I did not know the actual course until I played for the first time.” Schraffenberger said.

He spoke about how his family members have shown him how to play disc golf in the past, and how he lucked out by finding the class while enrolling last spring.

After finding out that it was offered as a credited PE course here, he knew that’s what he wanted to take.

“My brother in law, while I was younger, played it for a little bit. So that’s how I first learned about it, but I needed a P.E. credit, and then I saw that it was one of the offered courses. I was choosing between that and line dancing,” Schraffenberger said.

Schraffenberger also talked about the class. “I’d say I play two to three times a week. The class is only on Tuesdays but I don’t do much else on campus. It’s also good exercise,” Scraffenburger said.

Fundamentally, disc golf is very similar to and derives a number of its own rules from a typical golf game.

“It’s just like regular golf. You just want to get the disc into the basket in the least amount of strokes possible.” Schraffenberger said.

They begin to differentiate with how someone would typically score in a game. In golf, you generally rely on a good swing and solid contact with the ball. Disc golf,
however, relies on the choice of a proper frisbee.

“In golf you have different clubs, but in disc golf it translates to different discs. Some are weighed and shaped different depending on your shot,” Schraffenberger said.