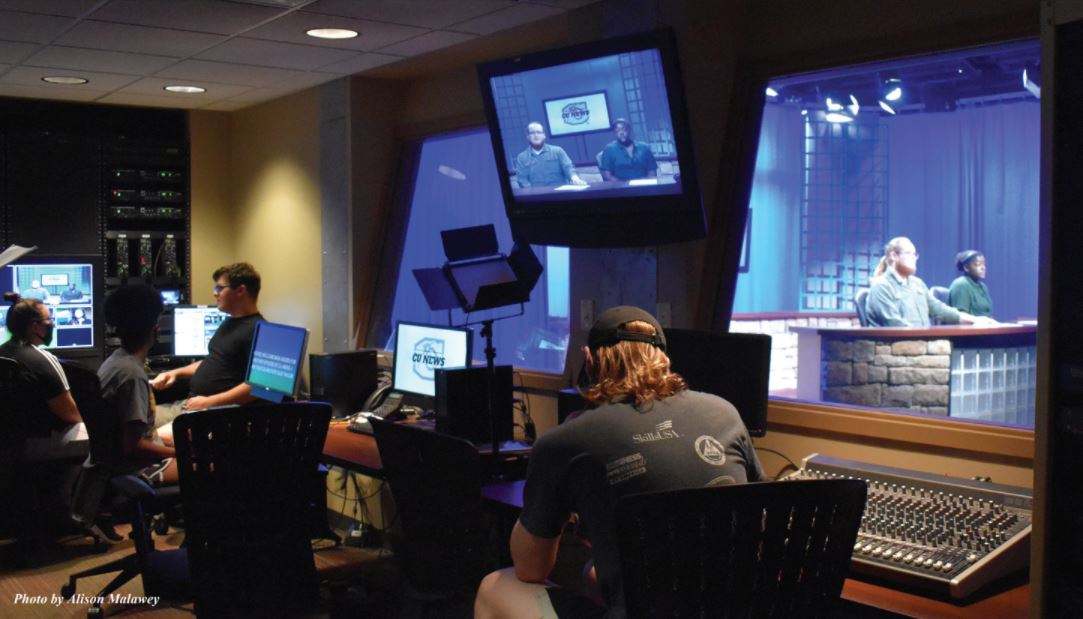 For students interested in Journalism and Media Production and other related fields, Cameron University provides support for student-led broadcasting television programs, such as CU News, Film Geek, and Gametime.

CU senior Asante Hardin was one of the anchors for the first show of Fall 2021 for CU News and he said that each week, the CU students change roles.

“We tend to play different roles during the show so that we can get an overall experience,” Hardin said.”

The different roles include: controlling one of the cameras, anchoring, moving the teleprompter, floor director and many other jobs. Hardin said that his prior classes provided him with knowledge on how to do the different roles. Along with various production work in the studio, students also act as reporters for the stories being covered, which also gives them hands-on experience.

“So, I stack the show,” Wood said. “I prepare like the director’s script and the anchors’ script and just get everything ready so that when we actually go into the studio everything is prepared and we can just film the show as if it was live.”

The show is prerecorded and the stories are put together by the students. For CU News in particular, the talent and crew that runs the program is a part of a class called Media Practicum where they are graded on the stories they put together for the show.

“I just read out story ideas and reporters are free to pick whatever story fits with their schedule,” Wood said. “If a reporter even has their own story idea they can just let me know. They can basically cover whatever they think is important.”

Wood said that she picks stories for the other students to choose from or they come up with their own ideas. They like to cover the stories and issues that affect Cameron students the most. CU News is filmed every Friday so that students can discuss hot topics and events on campus while they are still fresh on their minds. All episodes for shows on CUTV are uploaded to Aggiecentral.com

One thing many college students hope to gain before they leave school and go on to their professional careers is experience. Currently, when applying for jobs many employers require that their applicants have some kind of relevant experience. Cameron University can help with that.

“With how realistic our studio is, the people in the Journalism and Media Production majors can actually graduate and go working straight into news,” Wood said. “They will barely even need any training because they will be prepared.”

Hardin spoke of a similar message to Wood’s when asked about what advice they would give to students looking to work on CU News.

“I would highly recommend you take the class [Media Practicum],” Hardin said.

Additionally, Hardin said that being a part of the show looks good on portfolios and he expects his experience at CU will help him in the future. Later, he plans to move to Oklahoma City to pursue a career in news.