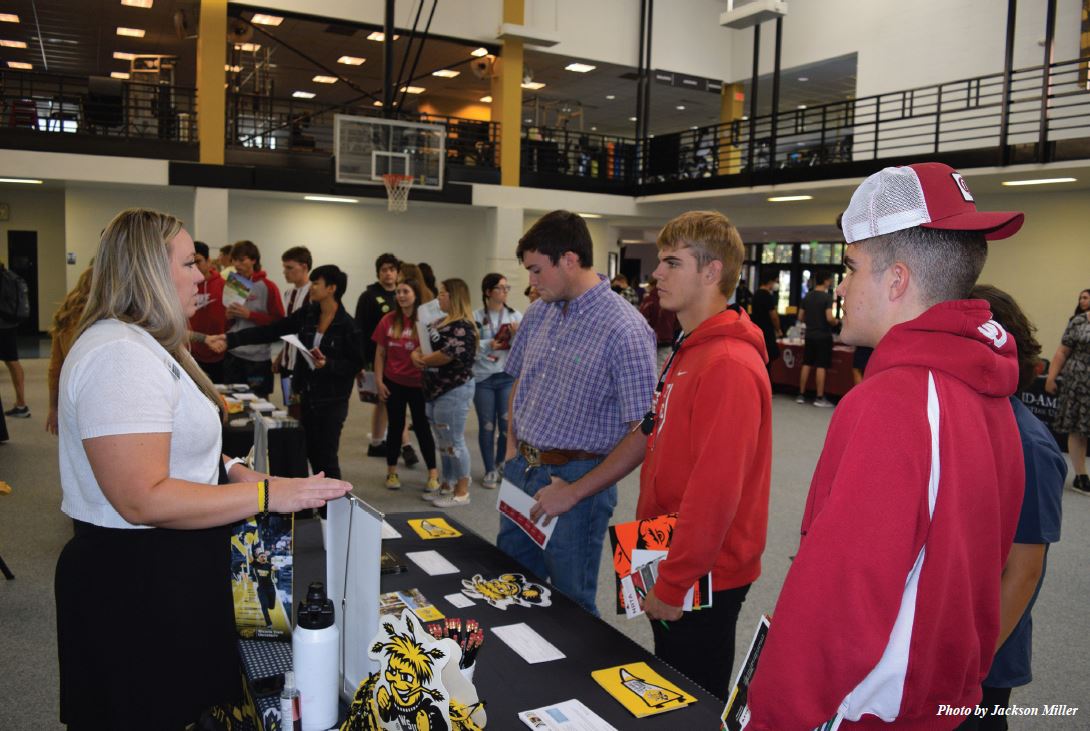 The Lawton area College Fair occurred at 9 a.m. on Sep. 23 in the Aggie Rec Center with 35 colleges trying to showcase to high school students what college has to offer them.

The goal of the fair was to inform students from around the area about college options in Oklahoma and elsewhere.

“That’s kind of what I have my eyes on.” Esports is an emerging sport propagated by sites like Twitch and YouTube where gamers host streams and compete with one another in online gaming sessions.

Palmer also said that he was looking at going to Cameron for this reason, because the university has an esports team.

Geronimo High School senior Manuel Maldonado said he would like to pursue a degree in film.

“I’d just like a career where I can edit or even act,” Maldonado said.

Hinch said that the event was a good opportunity to explore options after high school.

“The school asked us if we wanted to miss class and see what the college fair was all about, so I said ‘sure, let’s go,’” Hinch said.

Hinch does not know what he wants to do yet, but he has a few options in mind. “I learned a lot about the University of Tulsa, as well as ECU and OU,” he said.

The event also featured a long list of colleges seeking to recruit students by highlighting certain perks that the students may get by attending, such as financial aid.

One college that had representatives in attendance was the University of Central Oklahoma, which is in Edmond. UCO currently has around 14,000 students with 119 undergraduate programs to choose from. UCO representative Jayde Lamb has been working for UCO since June of this year.

Although UCO has a large body, Lamb reassures those who may seem overwhelmed by this figure that a students’ academic needs would still be met in the classroom. “There are quite a few students that are on campus,” Lamb says, “but our average class size is around 26 students, so it’s pretty personalized depending on the major.”

Some colleges in attendance were community colleges, which focus more on two-year degree programs instead of four.

Oklahoma City Community College (OCCC) currently has approximately 22,000 students in attendance who are seeking to obtain associate’s degrees or extra credits, with over 60 degree programs to choose from.

These classes range from the traditional, in-class setting, or virtual and hybrid classes such as the ones that Cameron currently has.

OCCC representative Arely Vera said that it is the mission of the college for every student to feel welcomed.

“Every day is exciting to work,” Vera said, “because every student is different, and every opportunity to help them achieve success is amazing.”

Vera says that the university also has scholarships offered, as well as tuition waivers for qualifying students.