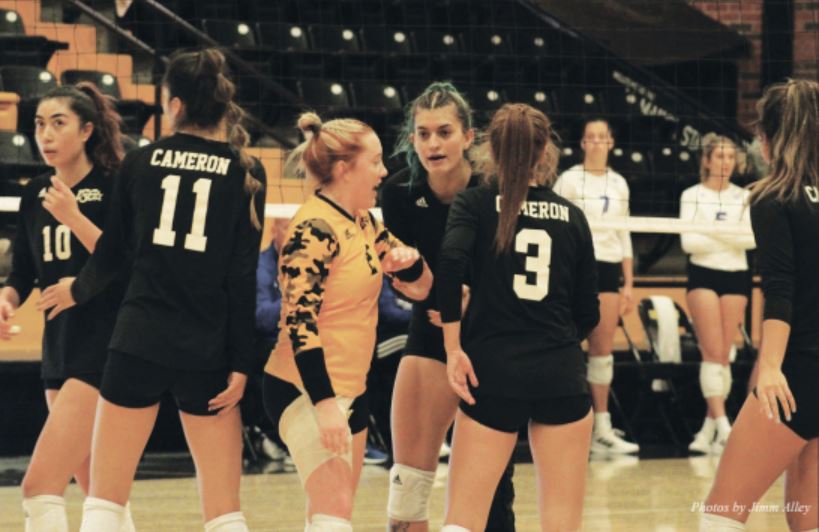 The Cameron University volleyball team faced off against Lubbock Christian University on Sept. 24. After three matches, the Aggies suffered a loss against LCU with the final score of 3-0.

The team played at Aggie Gym where they had hoped to secure their first win in front of a home crowd. The win would have marked an overall second for the Aggies this volleyball season.

Each team played neck-and-neck leading to a close half in the first match. Towards the second half of the game the Aggies began to falter, allowing LCU to score a 25-17 lead.

Early into the second game Aggie Head Coach Brandon Stephenson called a timeout as Cameron struggled against Lubbock Christian’s offense. Stephenson’s call allowed for the Aggies to attain a second-wind in the later half. The teams played down-to-the-wire until Lubbock Christian pulled ahead leading with a score of 25-21.

In the final match the Aggies lagged behind LCU 6-1. Despite Cameron’s attempts the team failed to pull ahead, ending the match with a 25-14 win for Lubbock Christian.

Aggie Head Coach Brandon Stephenson noted upon the errors made in the game and their overall impact on the team’s performance.

“Right now it’s a lot of errors. Mental errors, hitting errors,” Stephenson said. “You saw times where you get a two-point run and then a hitting error and it would deflate all that energy.”

Stephenson further discussed the need for improvement in regards to the mental errors made in the games.

“We gotta be able to take the good and the bad,” Stephenson. “When we have an error, let it go and refocus and respond rather than react to it.”

Stephenson went on to highlight what the team needed to improve upon coming into the next game.

“Serve Receive is gonna be big. Sets two and three you saw us get down early, a lot of it was due to the serve received.” Stephenson said. “If we can get our Serve Receive and free ball passing to where we can get our offense run you can see the success we can do.”

Aggie Outside Hitter Bergen Campbell commented on the game and the team’s overall performance throughout the season.

“I think that we did well and every game we’re getting better working together,” Campbell said. “But I think there’s always room for improvement.”

“We need to have a better connection with our setters and our passers. We all need to talk,” Campbell said. “Communication is the number one thing and when we don’t communicate we’re not gonna be successful.”

“I feel like we did better this game but it’s just gotta get better every single game”, Campbell said. “We need to talk more and work together.”

With the loss the Aggies left the gymnasium eager to return. The team continues to strive towards success as they carry on with their season.