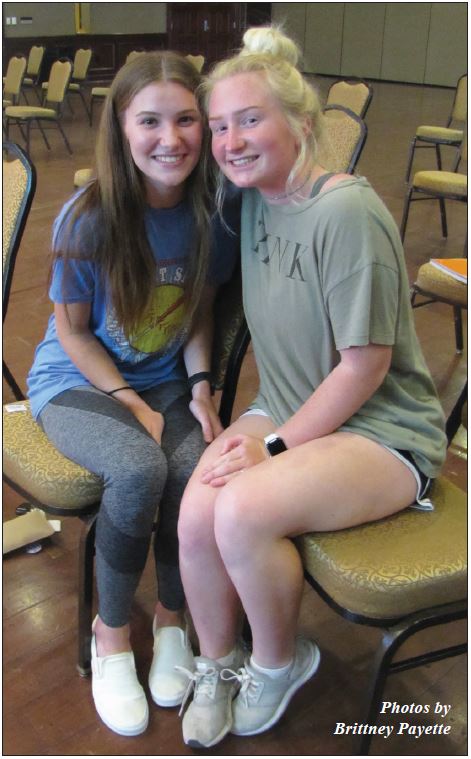 A Brief and Review

The Magic Lantern film Society opened its Fall 2021 semester with a screening of “Eternal Sunshine of the Spotless Mind” at 7:30 p.m. on Sept. 10 in the McCasland Ballroom.

Sophomore Keegan McCray and Freshman Brennan Price said that they enjoyed the film, which dealt with regret, relationships, and memories. They both agreed that they would not want to get rid of their memories of someone, even if some of the memories were negative.

McCray said that although she was confused at first, the plot started making sense later in the movie. Additionally, she felt like she knew what to expect and was able to better understand the movie because one of her professors had discussed the movie in class before. She also said that she felt like the movie was relatable because of the themes.

Price also enjoyed watching the movie and found it interesting and relatable, although she said that she would not feel comfortable erasing someone from her memories.

“You would not want to forget them.” Price said.

“We have always defined classic films as movies at least ten years old that have received critical acclaim of some kind,” Morris said. “Other than that, the only limitation is that the movies have to be available from Swank Motion Pictures, the company from which we license the films.”

The next screening for the Magic Lantern Film Society is the cult-classic Clerks at 7:30 p.m. on Oct. 1 in the McCasland Ballroom. For more information, students can go to Magic Lantern’s website at

Joel is an unreliable narrator whose story is told mostly through memories, which are subjective and skewed. The romance between Joel and Clementine is shown through Joel’s memories.

Joel is cautious, lonely, socially awkward, artistic and often quiet. Conversely, Clementine is sociable and quirky. She frequently engages in incredibly risky and impulsive behaviors. She has no issue breaking rules, such as breaking into a
house or driving drunk. She has a substance abuse problem, along with mental issues. These issues and differences cause strife in her relationship with Joel.

Joel and Clementine met initially at a party. Joel was immediately enamored by her vivid appearance and her tendency to throw caution to the wind. The juxtaposition of their very different personalities is also shown through their appearances. Joel’s world is grey and bland before he meets Clementine, whose colorful and ever-changing hair and personality brings brightness into his life that he did not have before meeting her.

However, their contrasting personalities lead to problems with their relationship, which ultimately leads to them breaking up. Impulsive Clementine decides to get a procedure done by a company called Lacuna, which erases people’s memories of someone. Clementine chooses to have Joel removed from her memories. Joel is heartbroken when he finds out what Clementine has done, and he decides to get back at her by erasing her from his memories as well.

During the procedure, we see Joel and Clementine’s past moments, from Joel’s perspective as Lacuna workers commence the eradication of Clementine from Joel’s memories.

During the operation, he remembers his and Clementine’s relationship- the good and the bad.

While the procedure is taking place, Clementine’s new boyfriend is trying to win her over by using Joel’s memories of her. This triggers Clementine as she tries to figure out why she feels that something is wrong with her, as she does not remember erasing Joel from her memories.

Joel ends up changing his mind during the procedure and decides that he does not want to go through with erasing Clementine from his memories, even if reflecting on the past hurts. He attempts to stop the procedure from destroying any more memories of Clementine by taking and hiding Clementine into other memories, where she was not supposed to be.

Meanwhile, Patrick, one of the Lacuna Company’s workers that erases Joel’s memories of Clementine, has to contact Dr. Howard because Joel successfully hides Clementine in past memory, thus stopping the procedure from progressing.

Dr. Howard does end up finishing the procedure, and Joel forgets Clementine. However, they meet again, not realizing that they have a shared history together.

The movie does a remarkable job of tying things back together and making things that may have seemed unimportant, at first, relevant later on. Initially, viewers may experience some confusion as to what is happening, but things come together in the end.

It is a truly masterful and immersive experience that takes the audience into the memories of its protagonist. The movie reminds the audience that all relationships have their ups and downs. It also has a theme of regret, especially
with Joel’s decision to erase his memories of Clementine and Mary’s realization that she had her memories of her affair with Dr. Howard erased at his wife’s insistence.

Joel, Clementine, and Mary all regretted having their memories erased once they learned what they had done because the feelings were still there, but the memories were not. It left them feeling confused and hurt.

The movie brings up important points about memories. Our memories make up an integral part of who we are, regardless of whether we perceive them to be good or bad. Even bad memories are worth remembering because our memories have shaped the person that we are now.

The movie was extremely well put together. The actors were wonderful, especially Jim Carry and Kate Winslet, both of whom brought their respective characters to life in a relatable and poignant way.

I thoroughly enjoyed the film, and I would highly recommend that you watch it if you have not already seen it.

If you have seen it, consider watching it again. It is definitely a memorable film that can be enjoyed again and again.

I would rate this film 5 out of 5 stars.