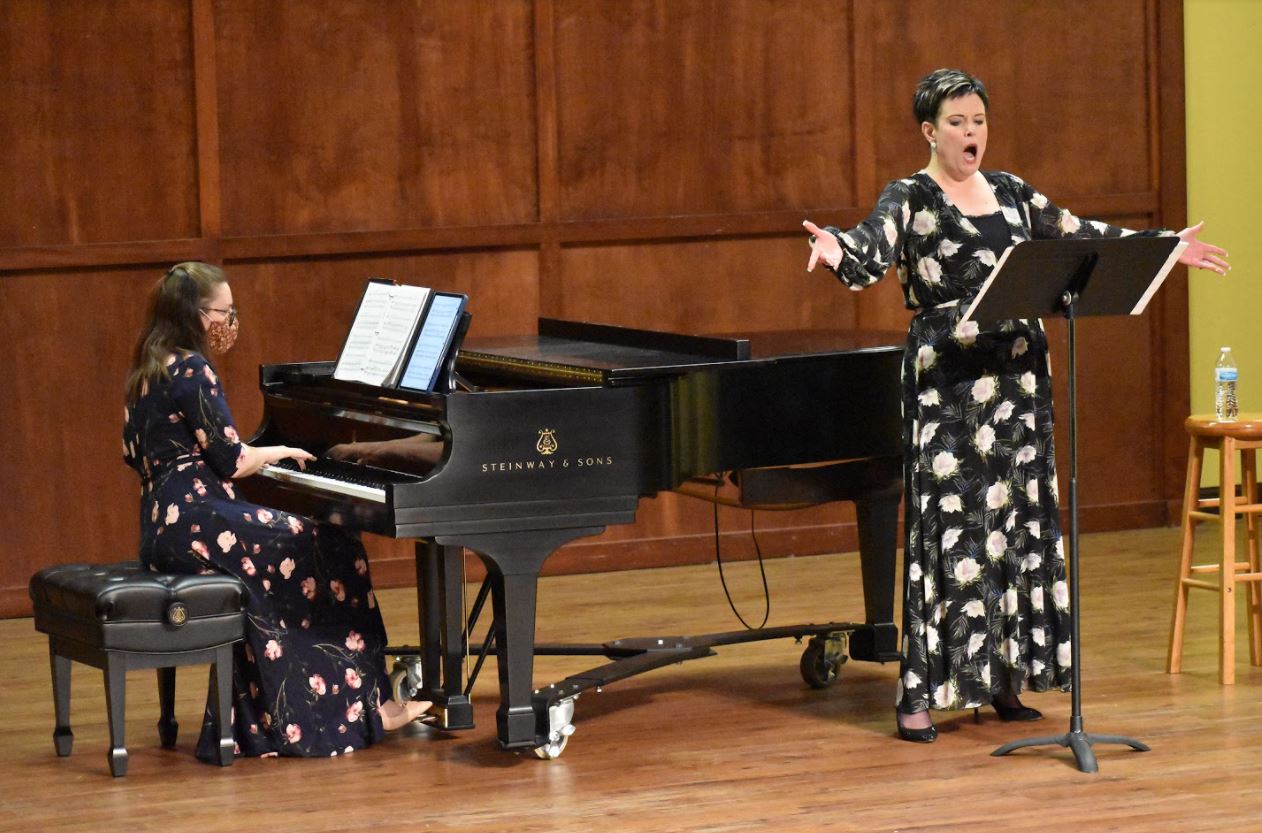 Guest artists, April Golliver-Mohiuddin (mezzo-soprano), and Megan Barth Argo (piano) chose the theme of the festival this year, “Through the Eyes of a Child.”

The duo started out with “A Slumber Song of Madonna” by composer Samuel Barber, followed by “Songs to the Moon – Part 1: Fairy tales for the children” by composer Jake Heggie.

After a short pause, the two continued with “Canciones Para Niños” by composer Xavier Montsalvatge, and then ended the evening with an arrangement prepared by Barth Argo titled “Rainbow Medley.”

Golliver-Mohiuddin is a voice professor in the Greenwood School of Music at Oklahoma State University. She is also a long-time friend of Cameron associate professor of music Christian Morren.

When Morren and music professor Greg Hoepfner were planning the event, they reached out to Golliver-Mohiuddin for help finding someone to perform contemporary music.

Golliver-Mohiuddin said, “Greg reached out to me and asked if I knew anyone that might want to be a part of a new music concert, and I had just finished a new music program. So, I said I would love to be considered.”

The New Music Festival is an annual music event put together by the Department of Art, Music, and Theatre Arts.

Hoepfner explained it as “basically a concert that is exclusively modern, classical music, in other words, classical music that has been written since, I like to say, 1960 and later. That doesn’t really sound contemporary, but in the classical world, it is.”

When it came down to choosing Golliver-Mohiuddin as a guest for the festival, for Hoepfner, it was a simple choice.

“She has a reputation for being a very gifted, contemporary classical vocalist/performer and that’s actually rarer than you might think,” Hoepfner said.

“Most people do sing the old classic standards from Bach, Beethoven, and Brahms, but to sing contemporary music can be quite challenging because of the complexities, rhythms, and tonality. It’s very different and challenging.”

Before the concert, Golliver-Mohiuddin taught a masterclass for vocal students of the music department.

Golliver-Mohiuddin said she chose the theme for the program after losing a child to a miscarriage.

“I’d gone to fertility doctors, tried different fertility treatments, and was unable to conceive,” she said.

“I would go and try to sing and, because singing is so much a part of my soul, I would break into tears.

“I decided that I needed to come up with a way to basically cleanse my soul from the sadness that I was dealing with in wanting children and for some reason not being able to have children.

“I put together this program, ‘Through the Eyes of a Child.’ So, everything deals with children.

“The other really nice thing is that my pianist, at the time we were planning this program, was actually pregnant, and she had a baby girl like two weeks before the recital.

“I was dealing with the sorrows of not having children. While, together, we were in a joyful mode as she was going through her pregnancy. It just seemed appropriate to do a program focused on children.”

Golliver-Mohiuddin explained that she and her husband have recently applied to foster/adopt a child and things seem to be going well.

For more information about events held by the Department of Art, Music, and Theatre Arts, you can call (580) 581-2346 or visit cameron.edu/art-music-and-theatre/events.