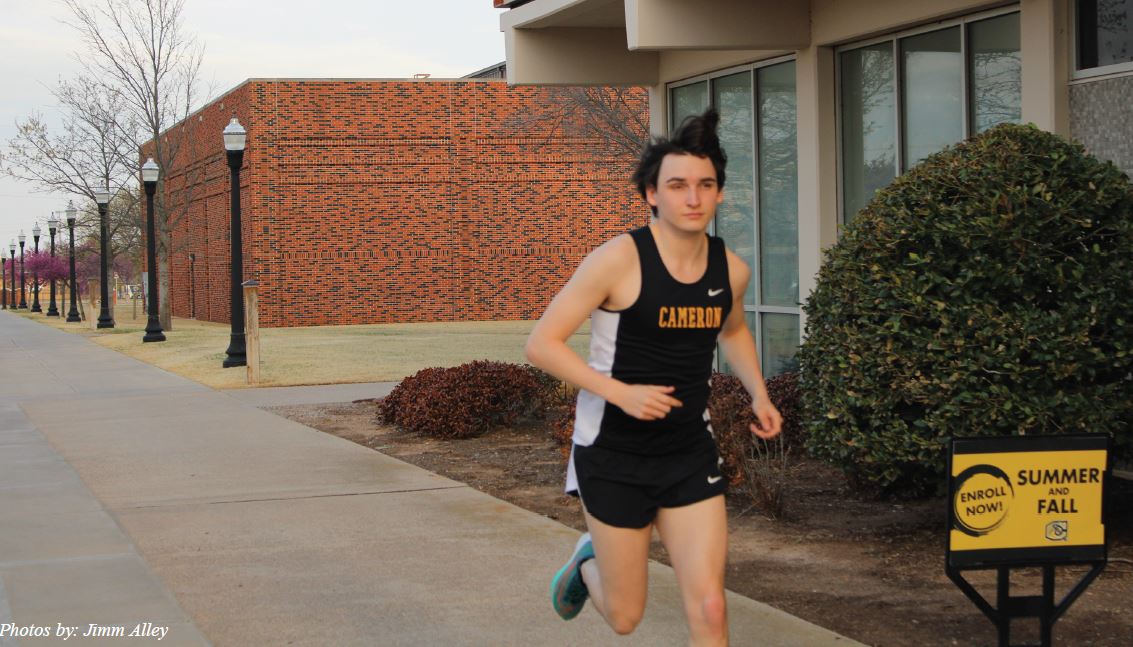 “I love to joke and say I hate running, but I think everyone hates running,” Medina said.

He said running helps him to relieve stress, and it is good exercise.

“I enjoy it as a way to work things out from the week. It definitely gives me time to think and be by myself.”

Medina grew up in the small town of Sapulpa near the Tulsa area.

In his freshman year of high school, he decided that he did not want to play soccer anymore and wanted to find something new.

His mother convinced him to try sprinting.

“Awful idea,” Medina said, “I was very bad at sprinting, but the next year, I tried mid-distance, and I did pretty well in that.”

Medina found success in high school after making the switch from sprinting to distance running and was the only member of his team to make state in his senior year.

Medina came to Cameron shortly after they had begun their track and field program.

“I was talking to the cross country coach here,” Medina said. “They recently got a men’s and women’s track program, so they were expanding a lot.”

Medina decided to accept the scholarship offered by Cameron because he believed that the opportunity to move to a new place would be best for him.

Medina experienced a lot of personal development since joining the Cameron track team.

In his time at CU, he has bested his personal records multiple times and competed in his first marathon, which he won after accidentally going two miles off the course.

“One of the arrow signs to turn around was knocked over,” Medina said, “so I kept running two miles past the sign, and then I noticed I hadn’t seen anyone for a while. So I turned around and the sign was put back up.”

After realizing the mistake, they allowed Medina to recalculate the numbers to adjust for the lost time.

Medina discovered after this that he had won the marathon, but they had already given out the first place plaque.

The 26 mile marathon did take a toll on Medina’s body.

“That is not a joke when a lot of people say you need to prepare especially for marathons, they don’t mean it so you can run well they mean it so that you can walk afterwards.”

Medina is a former Criminal Justice major, but is now a Pre-Law student hoping to attend law school after he graduates from Cameron.

He has aspirations of becoming a corporate lawyer but is also interested in working in civil law.

Additionally, Medina is the Grand Treasurer for the Kappa Sigma fraternity.

“I handle the money,” Medina said, “collecting dues, collecting fundraising payments and managing money we use for events.”

Medina is also a resident assistant in North Shepler, the male campus dorms.

“For me it’s a very fun job,” Medina said. “I get to meet a lot of diverse people and I get to have a lot of interactions with the students and residents on campus, so I have gotten to explore a lot of the diversity here at Cameron.”

Medina has grown not only as a runner but also as a student, person, and leader in his time at Cameron.

The future looks bright for another one of Cameron’s athletes and Medina looks to be ready to take that next step after graduation.

Medina hopes to be another additon to Cameron’s already vst alumni network.

Hopefully Medina can use his experiences from his time at Cameron to steer him in the direction of success.