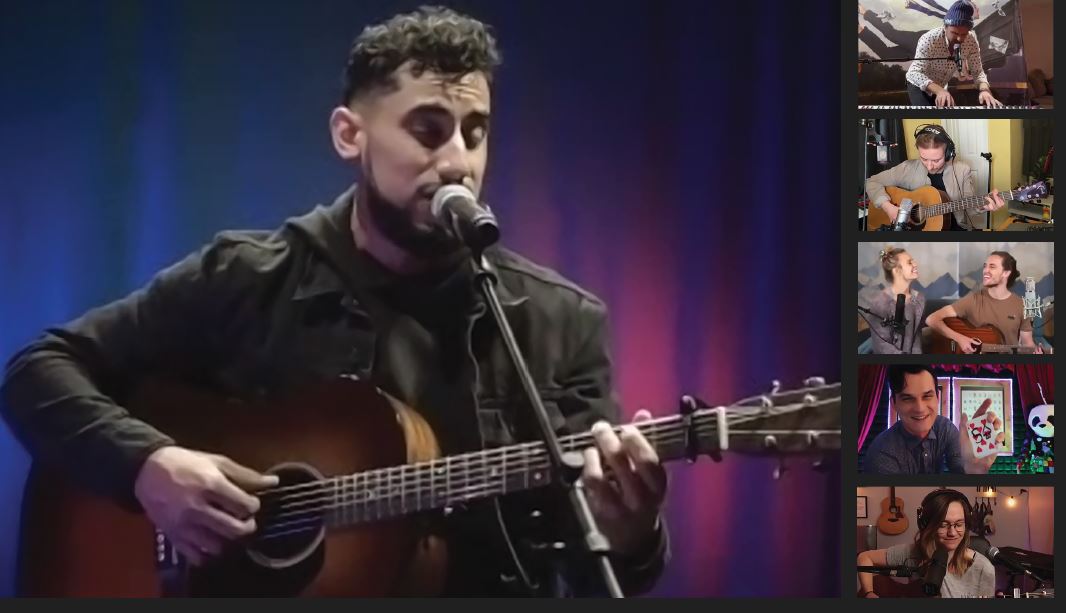 At 6:30 p.m., On Feb. 25, the Programming and Activities Council (PAC) and the Office of Campus Life kicked off the Cameron Virtual Festival as part of their Homecoming week events.

Throughout the event, attendees had the opportunity to win prizes for following “@pac_cu” and “@wearethebraveofficial” on Instagram, spotting a hidden duck doll during the event orpartcipating in a scavenger hunt.

Farley said his goal for performing is to make sure the audience is engaged and active in the performance.

“The biggest challenge is energy/interaction,” Farley said. “Performers thrive off feedback and magic is most enjoyable when people can interact. The best memories I’ve heard people saying they have [from] watching magic all centers around their involvement — ‘It happened in my hand,’ ‘they used ‘my card,’ ‘they used my coin,’ ‘I signed it!’ Virtual events changed the whole game. I constantly ask myself ‘how do I still create moments that feel personal, intimate and unique?’

“The best thing about performing remotely is being able to work with incredible artists from all around the country. I have yet to perform with someone that lives in the same state as I do, and I think that’s pretty cool that two people can perform in the same show from different states and even different countries.”

The event went through a process which lasted a few months, according to PAC President Katharine Monaghan.

“The terms for preparation was to figure out which business we wanted to work with,” Monaghan said. “Luckily, we have been able to connect with agencies through NACA [National Association for Campus Activities] Conferences, and that has helped us be able to find amazing people to perform at Cameron.

“Once we found the agency, we listened to a variety of singers and decided who we thought would be perfect for the Virtual Festival. After that, we had to fill out a contract of agreement, and once everything was completed, then we had our event.”

Anderson, who had been traveling for most of his life, touring between three to six countries a month before the pandemic hit, said that the pandemic shut down his daily life.

“I get butterflies hearing a plane overhead, using an app to see where it’s going, then using Maps to walk around that city.”

His project for the year is his new television show “The Adventure: Lifechanging Travel,” which he said will start filming in April.

“I anticipate it being a pretty emotional experience to be back in Morocco — which was one of the last countries I was in before the shutdown,” Anderson said. “But I think that emotion, and the experiences of the past year being home, will help us create a TV show that connects on an even deeper level with viewers. Because I know it will sure connect on a deeper level in myself.”

Music helped Torres cope with the isolation and fear stemming from the COVID-19 pandemic.

“For me, music has a way of expressing the beauty, pain and hope that compromise the human experience as a whole,” Torres said. “In hard times, I write and cover songs that help bring meaning to all of it — and one thing about hard times is that they never last.”

The event’s success is defined by the excitement of the event, and attendees telling others to attend, Monaghan said.

“Then after it’s all over they still talk about it and look forward to the next PAC event,” Monaghan said. “We love making CU students have fun and be excited.”

David Francisco said that music helped him stay in touch with his emotions and sense of expression to heal from negative experiences in his life and move forward.

“Music helped me express the emotions I was feeling in a deeper way, in ways that I couldn’t share just with words,” Francisco said. “And being able to express is crucial to the healing.”

Jonah Baker said that the songs they cover have to appeal to him and his audience in some manner — relevant or nostalgic.

“If I’m covering a new song, timing is critical,” Baker said. “So it’s not uncommon for me to pull an all-nighter to try to be the first person to cover the song. There’s equal parts strategy and guesswork when it comes to predicting which songs will become popular.  If I’m not doing a new song, I’ll pick a song that’s old enough to be nostalgic, but not so old that it’s been redone many times already.

“No matter what, I make sure I’m emotionally connected to the song I’m recording, and I make sure to approach it as if I had written the song. That way, even though it’s a cover its still uniquely me.”

Monaghan said that she loved how the event turned out, and she appreciates all the artists involved.

“They were so great to work with, and prior to the event, I had already met with them a year or so back,” Monaghan said, “so it was great being able to see them all again and having them be so excited with performing for CU.”

Coordinator of Campus Life Daniel McFadden said the festival had a positive impact.

“We felt the students had an amazing experience, and there was close to no technology issues, which was fantastic.”

For more information about future events, students can refer to the Cameron event calendar available on the Cameron website or call the Office of Campus Life at 581-2217.