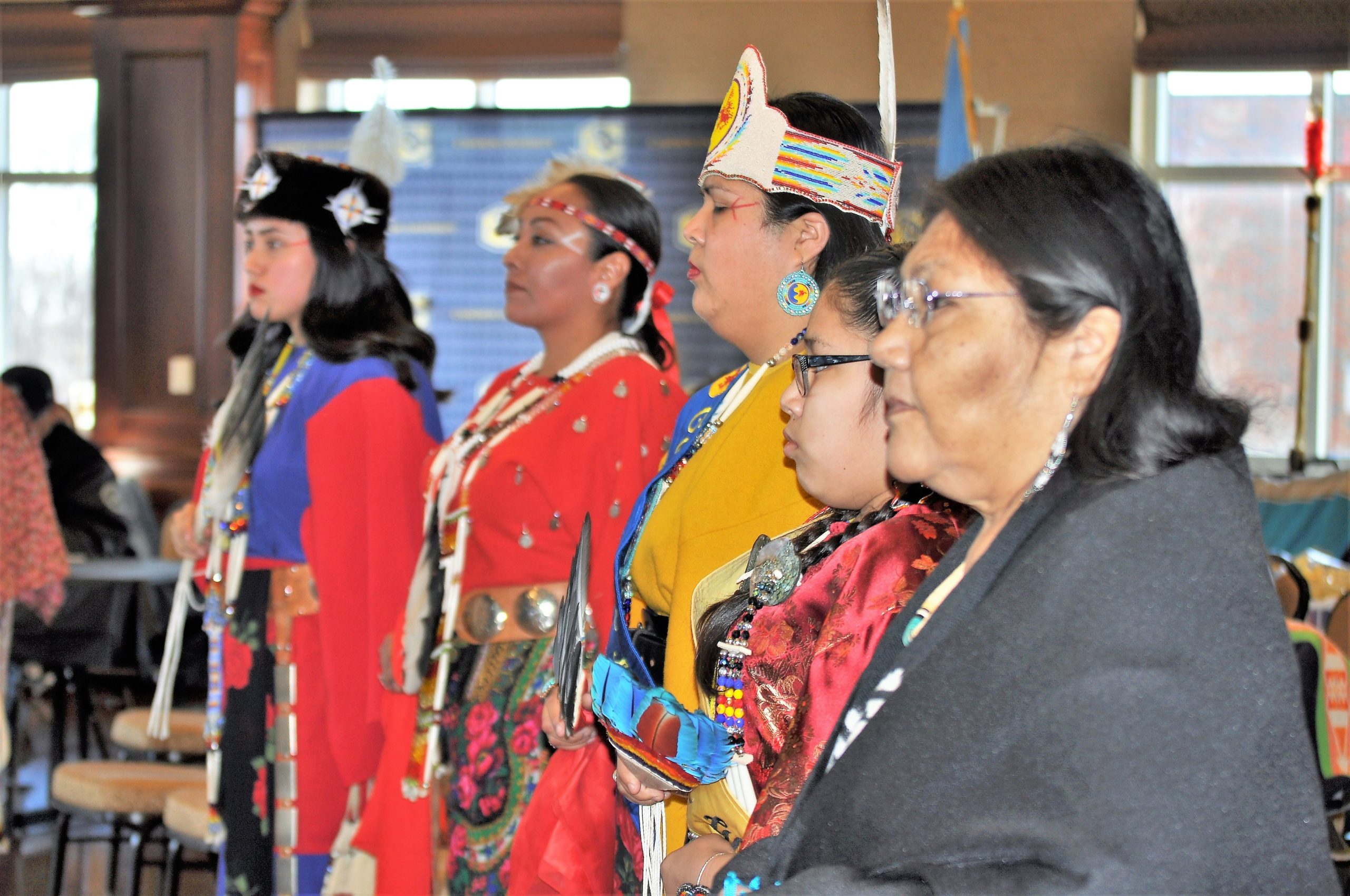 The powwow lasted until 10 p.m., showcasing various dances, contests and games from Native American culture. At 5 p.m., CU NASA provided a buffet-style dinner for free through Sodexo catering. During the breaks between activities, vendors sold art, and MC Hah-Tee Delgado shared stories with the audience.

CU NASA President and Allied Health junior Fawn Tsatoke said she felt moved by the meaning behind the event, especially with the scalp and victory dances.

“The powwow was like a celebration of all of the things that we’ve been able to do from last year,” Tsatoke said. “That was probably the first time those dances or those songs have been performed or heard on that land, as opposed to land before Cameron was here and before Lawton was here.

“All throughout Lawton,” Tsatoke said, “before anything was here, our ancestors — our people — were here. To me, that means a whole lot. That fact that this is a place of education, it was kind of like saying ‘thank you, we made it — we’re still here.’”

“I’m glad to see everyone so willing to come out and show their support for us, here, at Cameron,” Mithlo said. “They’re willing to help us work toward what we want and raise awareness for the native youth — that you can go to college and you can achieve your dreams as long as you’re willing to work for them. So, it’s just amazing to see all the support come out.”

Tsatoke said this powwow went even smoother than the first one.
“We started planning at the beginning of the fall semester,” she said. “We tried to hit every aspect that we could in such a short period of time, which is why we started at an earlier time.

“I’m so glad we were able to bring it to Cameron,” Tsatoke said. “We wanted people to hear the music. We wanted them to see our interactions with one another.”

Communication, English and Foreign Languages Assistant Professor Dr. Carie Schneider said she was impressed by the audience turnout and the students’ performances.

“It was really great to see how many people came out for this, even though we had some bad weather in the morning,” Schneider said. “There’s a really wonderful community atmosphere of everyone working together.

To prepare for the event, Tsatoke said her goal as president was to do everything she could to encourage communication between Cameron University and the Lawton community.

“It seems like Cameron is just Cameron and nothing else, but it’s a part of Lawton,” she said. “It’s a part of this history here. It’s become part of the land that’s it’s on, which used to be KCA tribal land, just as Fort Sill was.

“This is such a melting pot that our biggest issue is communication,” Tsatoke said, “and it’s always been communication. And change starts with people wanting to answer questions — with people starting to want to ask questions.”

Schneider said it’s her duty to learn about other people here and their traditions.

“Cameron has this fantastic community, and I would love in the future to see more faculty members here,” Schneider said. “I want to see some of my colleagues come to these student events, and I want other Cameron students and other Cameron faculty and staff to come see this community that we have here because it’s awesome. It’s the heart of who we are.”

For people who feel intimidated by attending cultural events like a powwow, Mithlo said no one has to feel lost or like an outsider.

“Don’t be afraid to ask someone,” she said, “because more than likely they’re willing to share with you and help you, especially if you’re new to this arena and everything about a powwow. We’re all about sharing our culture and letting people know what it is.”

Tsatoke also said she loves when people can set aside their differences and talk.

“Everything goes back to communication,” she said. “On-campus, in the community and in life. One way or another, you’re going to come across a different type of person than you. That’s what this powwow was about. It was about information, and unity.”

Tsatoke invited Cameron students to join CU NASA if they are interested in learning more about Native American culture or simply being a part of it.
“It’s not just for Native Americans,” she said. “Whoever wants to learn, whoever wants to join — come hang out with us because, to be honest, it’s really fun. Those students are hilarious. And we eat! We eat big meals at every meeting, and that’s cultural.”

For more information about the annual powwow or CU NASA, contact Fawn Tsatoke at fawn.tsatoke@cameron.edu.