At 7:30 p.m., on Nov. 7 and 8, the Cameron University School of Arts and Sciences hosted its annual opera workshop in the McCutcheon Recital Hall.

Made possible by the contributions of the Southwest Oklahoma Opera Guild (SOOG), the 2019 Fall opera workshop focused on a series of popular, well-known operettas and arias.

Operettas are short operas that usually contain a light or humorous theme and usually have spoken dialogue.

Arias are long accompanied vocal solo pieces that are typically in an opera or oratorio, a large-scale musical work for orchestra and voices which is known to have potential religious themes without the usage of props, actions or costumes.

Originating in Italy during the late 16th to early 17th centuries, the term “opera” is used to define a sung drama performed by vocalists and instrumentalists.

Having many historical ties to great composers, opera is a genre that allows for an alternative method of creative expression in contrast to genres with more modern origins, such as Broadway musicals.

In their mission statement, SOOG expresses a love for opera through sponsoring live performances and educational outreach programs in Southwestern Oklahoma.

Entertaining the audience with familiar stories from across the globe, vocalists performed pieces in the original English, French, German and Italian.

“This new journey of opera expands your horizons to multiple cultures, eras and different musical styles,” he said.

Performed by two  Mezzo-Sopranos and a Soprano — who acted as a trio of school girls — “The Mikado,” or “Three Little Maids From School,” by W.S. Gilbert and Arthur Sullivan served as the opening scenes of the performance.

The program then featured two more Soprano solo pieces including “The Sun whose Rays Are Ablaze,” which focuses on a self-aware and youthful girl.

The performance continued with “Alone and Yet Alive,” which tells the tale of a cheated maiden who wishes for death.

Performed by a Mezzo Soprano with two background performers, the trio helped portray the story of a woman who makes the acquaintance of sailors.

Next, originating from an opera by Pietri Mascagni, “Cavalleria Rusticana,” or “Rustic Chivalry,” “Voi Lo Sapete” is an aria that tells of a jealous and heartbroken woman whose promised love fell for another when he came back from war.

Next, “The Flower Duet” in “Lakmé,” written by composer Léo Delibes’ is a duet intended for a Soprano and Mezzo Soprano.

It focuses on a woman and her servant who go to pick flowers by the river.

Created by Giuseppe Verdi, the next piece, “Saper Vorreste,” is from the opera “Un Ballo Maschera,” or “A Masked Ball.”

Performed by a Soprano, the story focuses on a man who refuses to tell another about the King’s disguise, instead replying with a mixture of taunting and serious comments.

Created by Jacques Offenbach, “Les Contes d’Hoffmann,” also known as “The Tales of Hoffmann,” is an opéra fantastique.

In the fall performance of the Cameron Opera Workshop, students performed two arias:

“Elle a fui la tourterelle,” which focuses on a woman who mourns for her lost lover and “Belle nuit, ô nuit d’amour,” a piece that tells the story of a man’s love and his faithful male companion.

The next piece performed, written by Aaron Copeland, is also known as “Laurie’s Song,” which is found in the opera “The Tender Land.”

Performed by a Soprano, the story focuses on a young girl graduating from high school, nervous about what comes next.

“The Ballad of Baby Doe,” written by Douglas Moore, contains the next aria which is titled, “Warm as the Autumn Light.”

Performed by a Baritone and aided by a side performer, the song tells the story of a man who hears a woman’s singing that reminds him of his past.

Intended to be performed as an encore, “Duetto buffo di du gatti,” written by Gioachino Rossini and sung by a Soprano duet, the entirety of the piece consisted of meowing and hissing, taken from a cat’s natural vocabulary.

“Hab mir’s gelobt,”  served as the last piece of the night from the opera “Der Rosenkavalier,” or “The Knight of the Rose.”

Written by Richard Strauss and performed by a Soprano trio, the performance tells the story of a man choosing between his old and new love.

On a final note, the Opera ended with a bow from the cast and crew and a thanks from the director.

For more information regarding theatrical and musical performances, please contact the Department of Art, Music and Theatre Arts at 581-2346. 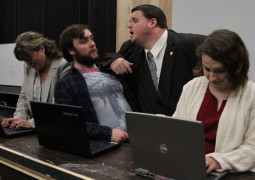 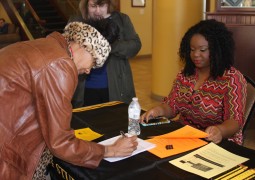 0 thoughts on “CU Opera Workshop: Through the Eras”