This semester, students had opportunities to learn more about communication among different faiths, including a group discussion and a semester-long course..

Discussion Event
Oklahoma scholars and experts on interfaith dialogue spoke about the importance of religious tolerance and interfaith relations during the Interfaith Dialogue Panel at 11 a.m. on March 25 at the CETES Conference Center.

Rev. Dr. William Tabbernee was one of the scholars in the discussion. As the Executive Director of the Oklahoma Conference of Churches, he said it is churchgoers’ responsibility to have panels and open dialogue to educate and connect with the community.

“What is so important is that we don’t characterize every Muslim as a terrorist and understand what the religion of Islam is really all about,” Tabbernee said.

He added that the point of these panels is to meet Muslim, Christian and Jewish neighbors and to recognize that, regardless of the different beliefs and theology, everyone has a unity based upon our humanity.

Dr. Imad Enchassi of the Islamic Society of Greater Oklahoma City said that, as a Muslim leader in the community, he wants people to know that he is human.

“My goal is to have people listen to my personal story,” he said, “to my perspective and to my scholastic knowledge as it relates to the religion of Islam.”

Enchassi emphasized the importance of learning from the practitioners of a particular faith compared to second-hand information from media. Tabbernee added how negative media coverage and misinterpretation of the Quran contributes to the misunderstanding of Islam.

Enchassi explained how extremes exist throughout the world where people use their religion to justify their actions. He went on to explain how extremism are societal and cultural issues, not a representation of the religion itself.

He then told his story as a teenager living in a Palestinian refugee camp that fell under Christian attack. However, this experience did not change Enchassi’s perception of Christianity based on positive interactions growing up.

Understanding the connection and differences between the Abrahamic faiths Judaism, Christianity and Islam are part of the curriculum. The course also covers Hinduism, Buddhism, Scientology and Atheism, among other topics.

Interfaith Dialogue is not about proving one religion or belief system as superior. Rather, it encourages learning and engaging in effective conversation with those of different faiths.

There they discussed how colleges and universities around the country are starting to offer an interfaith degree program.

Drew University conducted a study on the importance of interfaith in a hospital setting. Dr. Dollarhite explained that their findings suggest that patients benefit the most when their physician understands their religious background in order to help with preparation for surgery and the healing process.

“How can we maybe be the moderators or be the people to bring peace in a situation?” Dr. Dollarhite said. “To use our communication skills to enhance conversation rather than allowing people to attack each other with their words.”

Sophomore Cody Hervey said faith is a big part of his life and described how the course has contributed to his ability to be more open minded on issues pertaining to religion after just a few short weeks. ​​​​​​​​​​“Understanding where some of these beliefs culturally came from really has helped me to become more accepting of other people and other faiths,” Hervey said. “Even understanding basic elements of my own faith.”

Hervey also said he would recommend this course to other students on campus. He believes it contains valuable knowledge that can be applied to everyday life.

The course objective aside from learning about the different belief systems is, “to be able to recognize barriers to effective listening and strategies in order to increase listening skill of verbal and nonverbal messages within Interfaith Dialogue.”

While taking the course, students will be challenged to listen to differing perspectives, stretch their own belief system and engage in positive non- threatening discussion with people of other faiths and backgrounds.

Editorial: For the love of the game 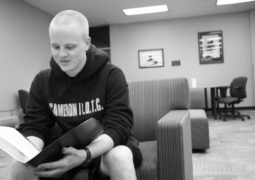 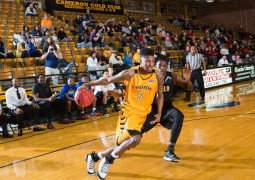