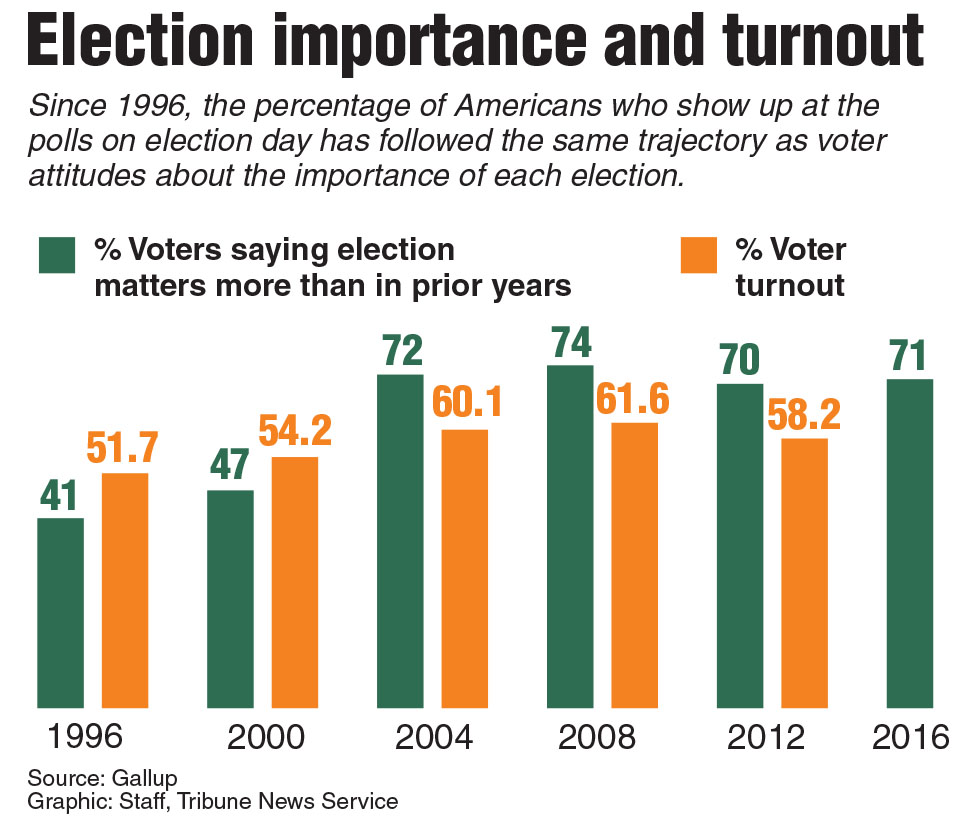 Courtesy of Tribune News Service
Chart showing turnout vs. voter attitudes about importance of past elections.

This command is arguably the number one thing many professors, peers and colleagues have asked of students throughout the semester. It’s starting to get old for some of us, almost to the point of triteness.

But that doesn’t make voting any less serious of a matter.

Many political scientists will cite various reasons why every vote matters. As Martin P. Wattenberg of The Atlantic said, though, on an individual level, it seems to pass in one ear and out the other.

“In our winner-take-all system,” he said, “many Americans rightly perceive that their votes are unlikely to affect election outcomes.”

This reason was just one of many Wattenberg cited as potential reasons for the low voter turnouts in elections since the 1970s.

Despite rises at the turn of the millennium, this trend continued since the 2012 presidential elections and the 2014 midterm elections. According to Fair Vote, Oklahoma ranked 49th and 45th in the last two elections, respectively, with just over 49 percent turnout in 2012 and just under 30 percent in 2014.

Other websites show that these numbers are even lower for younger individuals. Pew Research stated that 41.2 percent of registered voters aged 18-24 voted in the 2012 election.

However, Pew also projected millennials will grow in terms of electorate share. In 2013, they comprised 25.5 percent of the voting populace, which the research group predicted would grow more than 10 percent by 2020.

Yet Elect Project still notes that voter turnout across the board dipped substantially in 2014, with a turnout of under 20 percent in the 18-29 demographic. The change in voting numbers is common from presidential elections to midterm elections. But the turnout from 2014 marks the lowest turnout in the last 30 years.

While this trend applies to other demographics, it seems to weigh more heavily on millennials, whether in statistics or in perceptions of individuals like Wattenberg. He stated that lack of exposure to political conversation on television and the Internet have quashed the political urgency seen in older generations.

“Young people today have never known a time when most citizens paid attention to major political events,” he said. “As a result, most of them have yet to get into the habit of voting.”

This lower awareness occurs despite millennials’ collective knowledge, something Wattenberg feels is a great asset.

“The low turnout among young voters today is paradoxical given that they are one of the best-educated generations in American history,” he said. “Even those who have made it to college are expressing remarkably little concern for politics.”

He postulated a lack of political urgency was a large part of why millennial turnout was so low compared to their parents and grandparents. The Vietnam War and Medicare appeared to have more of an effect on their generation than on the current group of young adults. But he also mentioned this apathy could have an adverse effect on issues younger voters care about.

“Until they start showing up in greater numbers at the polls,” Wattenberg said, “there will be little incentive for politicians to focus on programs that will help the young.”

So maybe, on the grand scheme of things, individual votes may not count as much as some people would want to believe. But that shouldn’t be a motivation not to vote, since failing to do so could mean that politicians may not pay attention to things you care about. It could easily leave you less likely to vote, thus continuing the cycle.

The individual plea may not be the best route, but the fact of the matter stays the same: people need to get to the polls.

There’s more at stake than just the presidential election, too. State propositions, state House and Senate votes and Congressional votes are up for grabs in most elections throughout the nation. There is more that affects your life than just who sits in the Oval Office.

These things all need your opinions and, by proxy, your votes. It may not matter in some states that are heavily one party, where minority voites mostly making for a slimmer margin of victory.

But a big enough shift can cause bigger ones in the future. Change doesn’t happen overnight. It takes time, but even the smallest augmentations can be the start of something larger. That said, there is one way to get it all started. 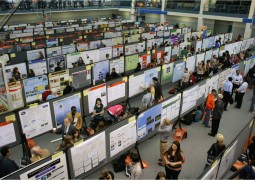 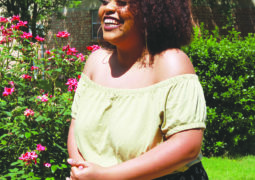 0 thoughts on “Opinion: The Importance of Vetoing Voting Trends”