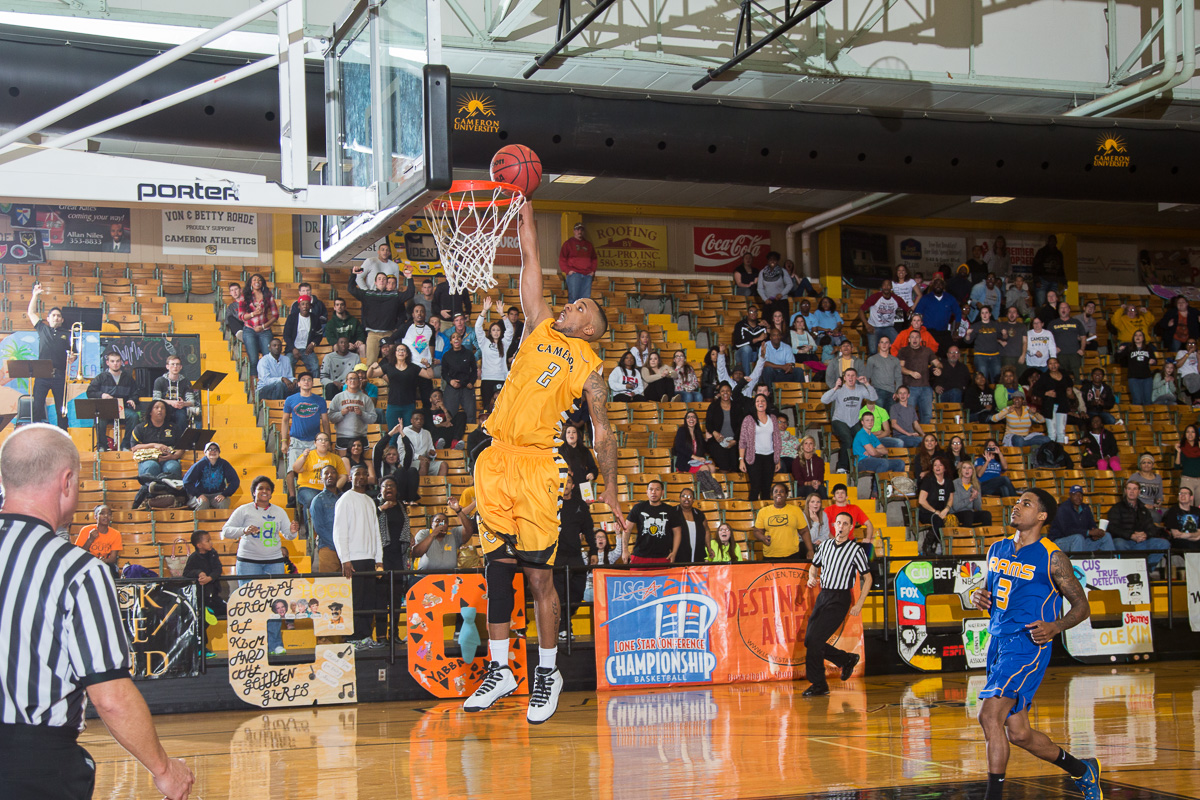 On Feb. 21, the men’s homecoming game tipped off against Angelo State. The Aggies sought to break their two game losing streak and go out with a win at the last home game of the season.

The game started off slow with neither team on the board after the first two and a half minutes. ASU opened up the scoreboard after their fourth attempt on the basket. Cameron turned over the ball allowing Angelo State to make a three. Cameron was now down by five.

The Aggies started to make a comeback to limit the deficit to 14-13 before ASU fouled Jamaal Brantley. After sinking one of his two free throws, Brantley tied the game at 14 points.

Cameron fouled ASU during a three point shot, giving them three free attempts allowing the Rams a three-point advantage. After a grueling battle for the lead, Cameron went into the locker room at the half leading by 4 points, 41-37.

The beginning of the second half saw Cameron lose their halftime lead. The Rams hit a three for a one-point lead over the Aggies. Cameron tried to retaliate, but Angelo State rebounded a missed layup. ASU took the ball down the court to extend their lead further with another successful three.

Cameron slowly chipped away at ASU’s lead to tie the game with just over a quarter of the half left. The rest of the game stayed within two possessions. Both teams kept it close, exchanging the lead several times.

With 3:28 left, Desmond Henry made his first of two free throws to earn the Aggies the lead at 70-69.

ASU went down the court, missed an attempt at the basket, and lost the rebound to CU. Henry capitalized by making a layup in the paint to extend Cameron’s lead to 73-69.

With nineteen seconds left and Angelo State down by four, the Rams made a three to cut CU’s lead to one.

Deondre Ray was fouled and took the line to shoot two. He sunk both of them to give Cameron a cushion.

ASU made another layup to cut the Aggie’s lead back down to one, but Henry sealed the deal with a dunk off a fast break with three seconds left in the game.

The final score was 81-78 with Cameron as the victors.

The men’s basketball team is now 12-13 overall and 4-9 in the Lone Star Conference.