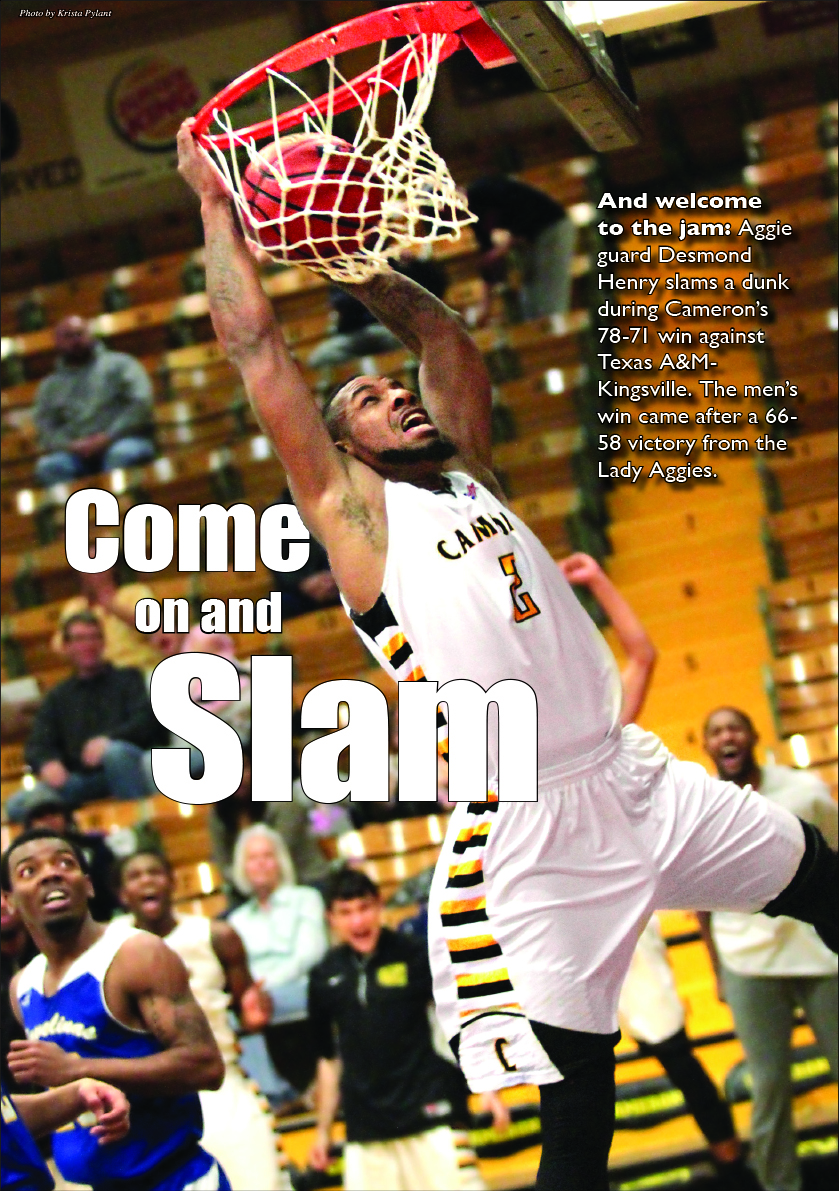 On Jan. 21, both CU basketball teams doubled the excitement with double the wins at Aggie Gym.

Cameron came into the game against the Javelinas with a half-game, first-place lead in the Lone Star Conference (LSC), while Kingsville came in still striving for their first win.

Head women’s coach Tom Webb expressed his satisfaction for the team’s performance against the Javalinas.

“I’m as proud of our group tonight as I have been all year because they are learning to deal with situations,” Webb said in a press release. “It’s hard to change defenses all the time, the flow wasn’t good. Give credit to them [A&M-Kingsville] for playing extremely hard.

“Sasha [Carter] did a great job, she went to the glass, I mean seven rebounds are huge; She is capable and is getting healthy. Credit our kids, they hung in there and we just have to move on to the next one. We just really have to focus on one game at a time.”

In the first half, Kingsville lead over the Aggies by five points, and then Cameron tied the game up before the Javelinas grabbed the lead back.

The lead kept alternating until 5:09 was left in the game. Senior Jade Herl made a three-pointer to take the lead, and the Aggies never trailed Kingsville again. After their 10-2 run, the Aggies were able to head into halftime with an eight point lead, tacking the score at 32-24.

Cameron came out of the halftime scoring. The Lady Aggies extended their lead up to 19 points during the second half.

The Black and Gold shot 51.9 percent while Kingsville made 46.4 percent of their shots. The Lady Aggies sealed the victory with a 66-58 win.

Junior Brandi Leal led the Lady Aggies with a game high 20 points and drained six three-pointers. As of Jan. 27, Leal led the nation in division-II three point field goals per game. As a result, OklahomaSports.net named her player of the week.

During the second contest of the night, the Cameron men’s team looked to break their three-game losing streak. The Aggies took on Texas A&M-Kingsville at 7:30 p.m. in part two of a basketball doubleheader.

The men’s game had a low scoring first half. The Aggies took an early lead. With 11:47 on the clock, the score stood at 17-7 Aggies, but the Javelinas were not going to let Cameron get away with an early lead. Kingsville fought back and slowly chipped away at the Black and Gold lead.

The Javelinas hit a three-pointer with 13 seconds left until halftime to take a one-point lead. The Aggies trailed at halftime 31-30.

When the second half began, the Javelinas were still hot and wanting to extend their one-point lead. The Aggie’s fought back, and with 16:19 left in the game, junior Jamaal Brantley scored a layup to take the lead.

The men’s basketball team is now 2-3 in conference play and 10-7 overall.