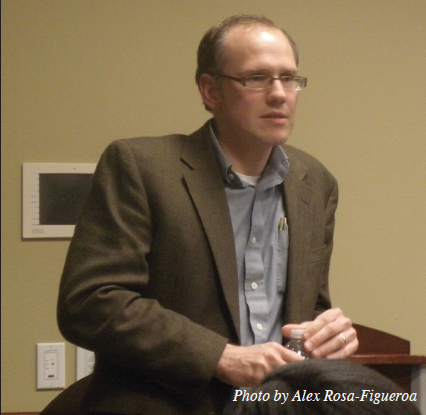 Cameron played host to Benjamin Myers during the last installment of the Visiting Writers Series.

Beginning at 7 p.m. on March 8 in the Center for Emerging Technology and Entrepreneurial Studies (CETES) Conference Center, students, faculty and curious souls came to hear Myers recite poetry from his latest book .

Myers is the winner of the Oklahoma Book Award and the author of two books of poetry. He is on faculty at Oklahoma Baptist University and his work has appeared in literary magazines including “Tar River Poetry,” “New York Poetry” and “Salamander.” For the night, Myers would read a number of poems from his newest collection, “Lapse Americana.”

Dr. Hardy Jones introduced Myers and gave thanks to the sponsors of the Visiting Writers Series for putting the event together — specifically Susan Hill, Department Secretary for the department of English and Foreign Languages.

After being introduced, Myers read from his collection. He started with a poem entitled “Spook House,” then moved on to “The City Dump,” a somewhat tongue-in-cheek poem he explained was rooted in his own personal history.

“I’m from a small town where we celebrated all the rural festivals,” he said. “The most important festival we celebrated was ‘Free Day’ at the dump.”

From the discussion of small-town ennui in “Going Far” to a dedication to his father’s memory in “Trampoline,” a number of Myers’ poems found their origins in the life of the author. This combination of history and writing was also exemplified in “The Man from the Colonies,” which according to Myers’ put a unique filter over his decision to take root in his old home town.

“I found myself readjusting to the idea of growing old in the town I grew up in,” he said. “This got mixed up with the old sci-fi movies I watched as a child.”

Myers’ poems did not only take form from his past, though. He explained that his piece “Mannequins” was the result of a tried and true writing technique.

“If you want to put guts in your poem, write about what scares you,” he said.

He called upon these fears in a later poem, “With my Daughter at the County Fair.”

“This poem is about being a father,” he said, “which is almost scarier than mannequins.”

The focus was not entirely on Myers, though. The visiting poet, on two occasions, would read a selection or poem from another, less contemporary writer. Myers read Gerald Hopkins’ “Spring and Fall” and John Berryman’s “Dream Song 14.” He said it was a part of his nature, to give the spotlight over to other poets.

“When I do readings, I like to include other people,” he said. “I guess it’s just how my mother raised me — I just get self-conscious when it’s all me.”

After the reading, Myers held a question and answer session with the audience. The first question of the session concerned his decision to be a poet, which he said was not much of a decision at all.

Myers went on to discuss his own humorous style, with regards to the necessity of a laugh in poetry.

“Poetry doesn’t have the audience today that it did before,” he said. “That’s the fault of poets — you can’t bore people day in and day out and expect them to be interested.”

Myers, at the end of the night, explained his philosophy on poetry and how it related to the creative process.

“I think poetry comes naturally to us all of us, but most of us get our inner poet shut up,” he said. “The trick is to be writing every day.”