The show began at 6:30 p.m. in the Museum of Great Plains and will remain open to the public until May 5.

Senior Art major Blagica Ristovska said she and her fellow graduating Art students have spent their entire Capstone course working toward the purpose of this exhibition. 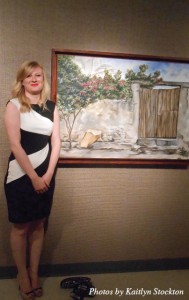 Not only did the students create and design the invitations for the show, Ristovska said the group also organized the food and music preparations as well.

“We worked together to do all the publicity, the design of the invitation, sending the invites to everyone and hanging work. We have worked on everything from day one: catering, music, everything,” Ristovska said.

Ristovska said the students were also in charge of naming the show. As their graduating class consisted of artists that used a variety of styles, cultures and mediums, she said the concept of the name came from their diversity and unusualness.

“The reason we called it unorthodox is because it is such a variety of artists that are presenting their work,” she said. “Some of the artists are not working in traditional mediums. We have a lot of digital work and a lot of printmaking work. We have a lot of international students graduating this semester. It is something that is unusual, something not typical and something you haven’t seen it before.”

Twenty-four-year-old Ristovska said she was both excited and scared to see her art displayed for the public; the artist said she had experimented with various styles different from her norm.

“I was kind of scared since it is a little transition from my work. I have some very realistic pieces, and then I have some that are very nonrepresentational,” she said. “But I got a lot of positive feedback from it, and I am very excited about that. People are enjoying seeing my work, and that is a great accomplishment.”

Ristovska said she was blown away by the turnout for the show. While she said the crowds could be nerve-wrecking, she enjoyed the opportunity to meet and network with community members.

“The show is great,” Ristovska said. “We had a huge turnout. We exceeded the numbers from previous years. More people found out about it and came to see it. It is very exciting because there are a lot of people coming, and it is a great opportunity to show your work to different people, not just to your peers and your professors, but also people in the community.” 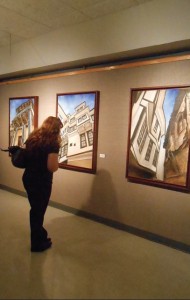 Ristovska was one of 13 Cameron University students presented in the show. The artist said it was an honor to display her work with her classmates.

“This particular group is full of talented artists,” she said. “We’ve grew together. We’ve grown up together. It is exciting to share this experience with them. We have such a diverse group. It is such an honor to be a part of it.”

Dr. Katherine Liontas-Warren — one of Ristovska’s professors — said she was proud to see her students’ growth displayed for the public. As she and her fellow professors have had all the students in classes and have seen them grow as artists and people, Dr. Liontas-Warren said she sees fantastic futures for her students.

“We are certainly very proud of them and to see some a great variety of work from each student. Their visions have just developed these past four years,” she said. “I wish them all the best in their future endeavors.”

For Ristovska’s future, she said she plans on pursuing her love of architecture in graduate school. She said she will continue to enter shows and her love of making art in the process.

“I don’t know how much time I will have, but I want to still be an artist while pursuing a degree. Architecture is really interesting because it can be a combination of science and art. Architecture is a perfect blend of that. I got accepted into five different graduate schools,” she said. “As soon as this show is over, I have to make a decision.”