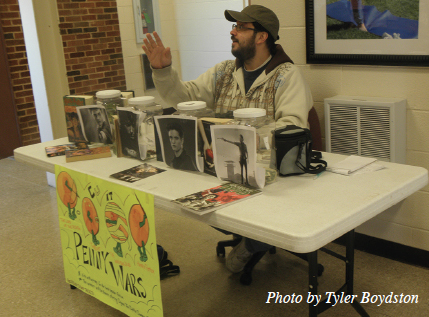 The media that competed for the honor of being shown at the festival included the “Harry Potter” series, “Lord of the Rings,” “Twilight” and “The Walking Dead.” The first Penny Wars was set from 9 a.m. to 1 p.m. on March 14 in the first floor of Nance-Boyer.

According to Sigma Tau Delta’s vice president and senior English major Seth Copeland, the idea for the Penny Wars came from a workshop one of the members had attended.

“One of our core members had observed the concept at a Sigma Tau Delta workshop she attended and thought that would be a good idea, to pit examples of popular fiction together that have film adaptations to see who wins,” Copeland said. “We would have people toss in some cash for their favorites, specifically pennies, but we were open to different amounts. Whoever wins would be aired during our summer movie festival.”

Copeland said Sigma Tau Delta would show the winning film series at the festival, taking place at the Center for Emerging Technology and Entrepreneurial Studies (CETES) over the course of the summer.

“The summer movie festival is hosted by Sigma Tau Delta and is held in the CETES Conference Room,” Copeland said. “It will be once a week, and we’ll show a film — in this case, we will likely show for part of the festival all of the films in that franchise.”

This is the first time that Sigma Tau Delta has had the Penny Wars at Cameron University.

“Other than the bake sales that other honor societies do, we’ve never tried something like this,” Copeland said. “So, when the idea was brought up at a meeting, we all decided this was an excellent way to make a little money and do something that people could get into.”

According to Copeland, the Penny Wars works as a way to show students and faculty films that have a footing in literature, as well as showing that people can take popular fiction seriously.

“Of course, we also get to scratch people’s backs, providing them with cinema entertainment with a literary bend,” Copeland said. “Part of it is a way to encourage the fact that all of these examples come from literature. With “Walking Dead” of course being a graphic novel, it is still literature. It’s a way to advocate popular fiction. In the English Department, we often distance ourselves from popular fiction and often pretend like it’s just this thing that goes on that we have to put up with. It’s valid, though. We have a Popular Fiction course, and just because something is big and popular and people are talking about it doesn’t mean it is trash or pretentious drivel.”

As well as the Penny Wars and the summer movie festival, Sigma Tau Delta will also be hosting the Shakespeare birthday party in April, and having their English awards banquet.

“Sigma Tau Delta will be doing various events,” Copeland said. “In April we will have the Shakespeare birthday party, which is always a wonderful occasion of pizza and fellowship and recitations and Cakespeare, as we call it. That’s the big event coming up, and of course there is the English awards banquet, where the poetry prizes, fiction prizes and creative writing prizes will be awarded, and new members will be initiated, including our new president, vice-president, secretary and SGA ambassador.”