A homelessness awareness event was held in Lawton on Friday and Saturday, April 5-6, on the land adjacent to Cameron’s McCord Field. Family Promise of Lawton, Inc. (FPOL) hosted this event, the First Annual Box City.

According to FPOL Executive Director Edwina Reddick, FPOL is an affiliate of the National Family Promise organization whose mission is to assist homeless children and their families to achieve and sustain economic and lasting self-sufficiency.

“Box City is a national initiative but we will be picking it up and we will be doing it annually,” she said. “We are very pleased with the success of Box City and we are pleased with the attendance as well as with the money we raised, even though, right now, we don’t know exactly how much that is – minus the expenses.”

Reddick said the Salvation Army provided the canteen to serve food and drinks to the crowd. 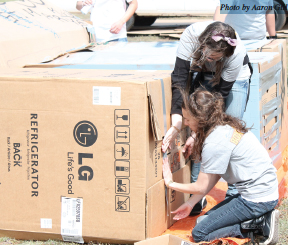 Kelly Dominick and John Edmondson, residents of the Salvation Army Shelter, volunteered their time to cook and serve 30 gallons of soup, bottled water and coffee to those participating in the event.

“We help the homeless on a daily basis,” Dominick said.

Reddick said that the Box City event was a major learning experience for many.

“One of the things that we learned in the process of doing Box City is that, right now, Lawton Public Schools has over 400 children registered as homeless,” she said. “And they have come up with a way of tracking the siblings of those children that are either not in school because they’re not old enough or because they have dropped out of school.”

According to Reddick, some people came from outside Lawton to be a part of the event.

Reddick said that although many were anxious to participate in the event, they did not realize how uncomfortable they would be. 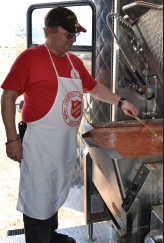 “We noticed that people were excited to be a part of this, but they were excited because of what they felt that they were going to gain from it – just by experiencing that overnight stay out there,” she said. “The next morning, a few people, especially the ones who slept in their cars, even though we think that it’s easy to sleep in a car – and we do have a lot of homeless families sleeping in their cars – it was not a good experience for them and it really changed their thinking about how homeless people live.”

Reddick said she had a box of her own to sleep in and that she was sore and achy the next morning.

“It was not comfortable at all – I had muscle spasms in places that I didn’t even know I had muscles, and when I woke up that morning, I didn’t have a comb for my hair or a toothbrush to brush my teeth,” she said. “Then I just happened to see my reflection in a window and I thought about how when we see a homeless person like that, then we want to start judging them and we shouldn’t because they haven’t had the creature comforts of the night.”

Reddick said that she hopes everyone benefitted from the experience and came away from Box City with a different outlook on homelessness.

“I think about people who are out there and homeless for whatever reason and then I think about those of us who are not homeless and how we don’t ever ask that homeless person what happened and how they got there, and then if we do ask, we do it from a judgmental standpoint,” she said. “Box City has given me a whole new outlook on my job here.”

“Homelessness is a state – it does not define the person – it is the state that the person is in at the time, but it does not define who that individual is,” she said. “I want family promise to become a community name that families know and trust that they can come here and be treated with dignity and be given the respect that I feel they deserve.”

Reddick said that she hopes Box City left an impression on people.

“I hope that the Box City experience made people want to volunteer, want to actively get involved, and want to be a part of the solution rather than just sitting back and talking about it – and it doesn’t just have to be with Family Promise,” she said. “C. Carter Crane operates on volunteerism, the Salvation Army operates on volunteerism, New Directions shelter, J. Roy Dunning – everybody can use volunteers – be it a hands on volunteer where they are actually in that particular place and doing something or be it on the board making the decisions for the place or whatever – just get involved.”