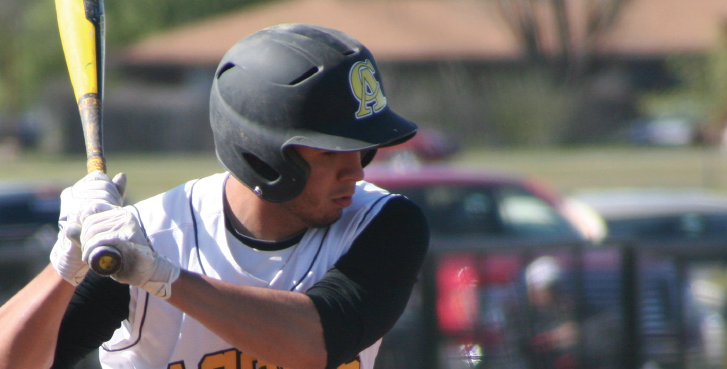 Cameron Men’s Tennis faced off against Midwestern State April 19 in Southlake, Texas for the semifinal of the Lone Star Conference tournament.

The Aggies entered the tournament as the top seed after finishing undefeated in regular season conference play. On this day the Mustangs proved to be the better team as they knocked off the Aggies 5-4

The Aggies fell behind 2-1 after the doubles matches had been played. Sophomores Nicolai Ferrigno and partner Dean Weiglet cruised to an 8-2 victory in the #2 slot while senior Duje Janjic and sophomore Angelo Lencioni came up short 8-4 in the top doubles spot. In the #3 slot freshmen teammates Joao Fazendeiro and Dennis Merdan lost a tough fought match in a tiebreaker 9-8 (7-3).

Cameron found success in the top half of the singles matches as Ferrigno took care of Luke Joyce in two sets 7-6, 6-0 and Janjic won in the #2 spot over Kyle Davidson in two sets as well 7-6, 6-0.

The #3 matchup found Merdan down after the first set. Merdan battled back and was able to even up the match and take the decisive third set for the victory 3-6, 6-4, 6-3.

Despite the Aggies success in the top three spots, the effort fell short as the Mustangs took the final three singles matches for the 5-4 victory.

The loss ended the Aggies’ eight-game winning streak and put their first place ranking in the region at risk. To the their relief, the Aggies found out Tuesday, April 24 that they will be the number one seed in the regional tournament and will play host for the tournament.

Head Coach James Helvey explained the Aggies are excited about the ranking but now have to show they deserve the honor.

“This year was more of a pride thing because we have been number one four or five weeks,” Coach Helvey said. “Even though we lost the match last week to Midwestern State, that was the only loss we had in regional play. I’m ready to all of that behind us and win the regional tournament, that would be the icing on the cake.”

The Aggies will face St. Edwards in the first round, a team they defeated 6-3 earlier in the season. Aggie standout Ferrigno will have an opportunity to avenge one of his two losses in singles play in a rematch against James Rogers.

Helvey said that the adversity of the loss against MSU or Ferrigno’s loss against St. Edwards can help the team stay hungry headed into the tournament.

“A lot of my players argue with me on this but its good to lose every now and then, losing makes you humble losing makes you work harder, when you get those winning streaks going you start thinking about it, and it builds up,” Coach Helvey said. “He (Ferrigno) is hungry, he has come by a couple of times and told me he wants that guy. If he would have beaten that guy, he might not be saying that right now.

The Aggies’ coach feels good about the Aggies chances based on their previous success against St. Edwards.

“I feel really good about the matchup and the big key is to win two of the doubles matches, if we can do that we will be in the driver seat,” Coach Helvey said. “We were able to beat them 6-3 last time without Duje (Janjic) in the singles lineup and he’s definitely going to be in the lineup this time and that adds strength.

The Aggies will play their first match of the tournament April 29 at Streich Henry Tennis Complex at Cameron.

Coach Helvey also mentioned that despite a tough regular season, the women’s team played well and deserves some attention for their season.

“They had a really good year, we had such high expectations after winning regionals the last two years,” Coach Helvey said. “It’s tough to win three straight times because other teams want you even more and our team has been to the mountain top and seen the view and its tough to get back.”

The Aggie women finished the season 15-7, 1-5 in conference, and senior Julia Puckhaber was named Lone Star Conference Player of the Year.