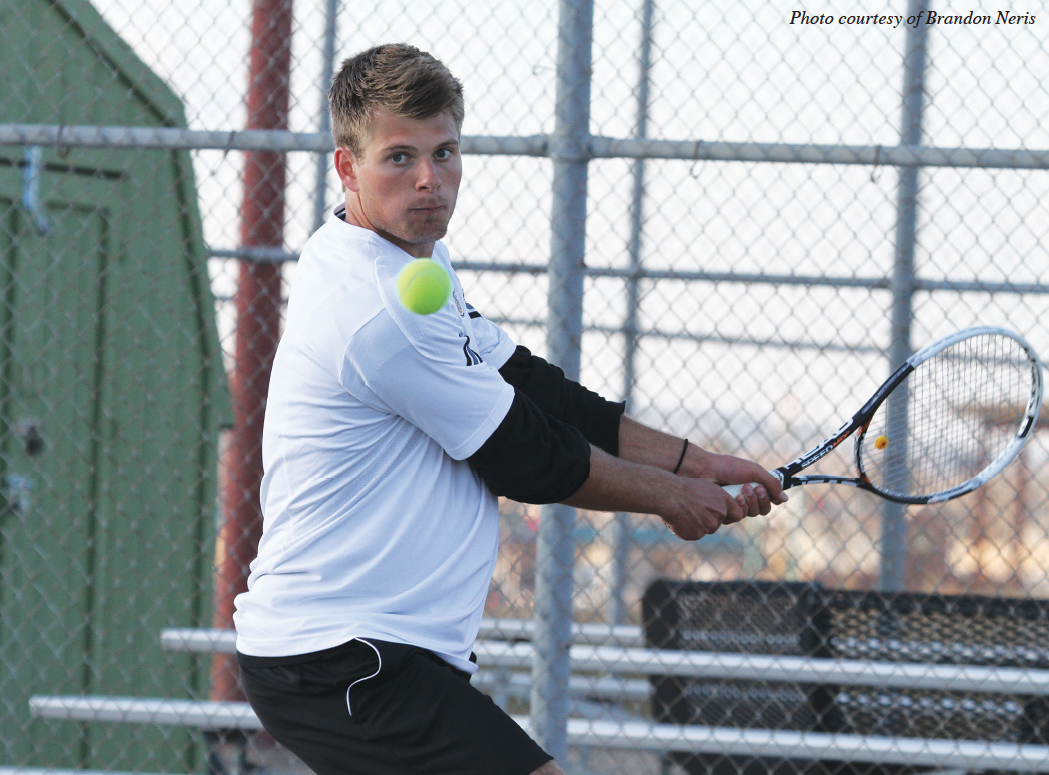 Cameron University Men’s Tennis has been on a tear this season and looked to keep the ball rolling as they traveled to Eager Tennis Pavilion in Abilene to battle Lone Star Conference rivals Abilene Christian University April 5.

The Aggies came into the contest with an impressive 15-2 overall record and looked for their first win against the Wildcats since March 31, 2009. Cameron standout sophomore Nicolai Ferrigno was also looking to continue his singles win streak of 17 straight against top regional ranked opponent, Hans Hach.

The Aggies battled hard all day and were able to come out on top in a close fought 5-4 win over the Wildcats.

The day started with three doubles matches which Cameron took advantage of coming up with two early victories.

Ferrigno and sophomore Dean Weiglet played as the #2 doubles team and were able to pull out a tough fought match, 9-8. Also securing a win for the Aggies were freshmen Dennis Merdan and Joao Fazendeiro who finished with a final score of 8-6.

Going into singles competition the Aggies needed three match wins to secure the victory and the middle of their lineup proved to be the difference against the Wildcats.

Ferrigno faced Hach in the #1 position and looked to avenge a loss from the last time the two played in the fall. Ferrigno came out in the first set and battled hard on his way to a 6-4 win in the set. Looking to end the match in two sets, Ferrigno had a match point but Hach was able to win the point and swing the momentum towards the Wildcats. Hach battled back in set two and won 7-5 and then took the third and decisive set 6-2 to win the match. The loss puts Ferrigno’s current singles record at an impressive 17-1 on the year.

Cameron Head Coach James Helvey said Ferrigno has been having a great season despite the loss and his hard work and maturity have been instrumental in his success.

“He (Ferrigno) has always been very mature, he just keeps maturing from last year,” Coach Helvey said. “He comes to practice every day and works hard, takes one match at a time.

“If he plays his cards right and the team keeps performing, he will get another shot at [Hach], probably in the conference finals.”

Senior Duje Janjic was able to bounce back from a first set loss to defeat Nicklas Wingord in three sets 5-7, 6-2, 6-3 in the #2 spot. Janjic, currently ranked #10 in the region, is 14-3 on the year in singles competition.

Merdan had a tough task in the #3 position facing the 12th ranked player in the region, Guilherme Gesser. Despite being the underdog, Merdan took care of Gesser in two straight sets 6-3, 6-4.

Merdan was rewarded for his performance by the conference being named Lone Star Conference player of the week.

The Aggies needed only one win from the remaining matches and found it in the #4 position as senior Jorge Gerosi defeated Jason Proctor in three sets 6-2, 0-6, 6-1.

With the victory, the Aggies moved into the top spot in the regional rankings. Coach Helvey explained while the victory over ACU and the top ranking are important, his focus remains going forward and not in the rearview mirror.

“They have a good team and it’s a good rivalry but when the match is over I close my book and I move on to the next match,” Coach Helvey said. “It’s always great to be on top but you’re just adding more people behind you that want to take you down.

“I always tell my boys that it’s just a number on a piece of paper and throw it out the window, we need to play tennis.”