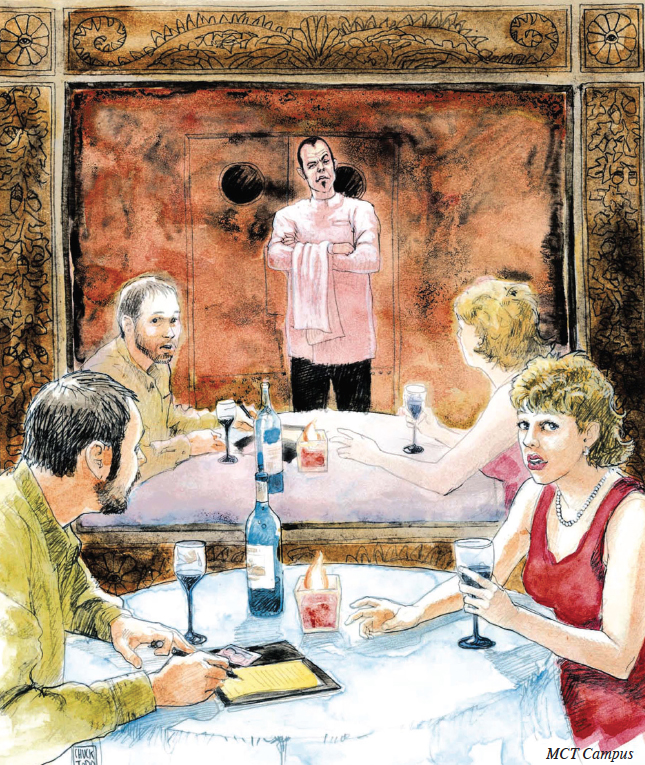 It’s almost midnight on a Friday. I’m wiping down my tables, filling my sugar caddies and replacing empty steak sauce bottles. The whole restaurant is empty except for one table in my section. We closed nearly an hour ago, but they are still sipping away on margaritas ordered three minutes before we closed.

No worries, I whisper to myself. No test tomorrow morning or anything, guys. Margaritas, rib eyes, filets, loaded baked potatoes and sautéed mushrooms on the side — and I see a five dollar bill sitting on the table.

Five dollars on a one-hundred dollar tab? Three of those dollars will go to the bussers, bartenders and hostesses. Three percent of the total of each check automatically tips these people out, and rightfully so. But the other whopping 200 cents will be mine. Can you imagine if there was nothing on the table? I would’ve paid right out of my own pocket to serve them while they ate at my table.

So let’s do the math. They’ve occupied my table for two and a half hours and I make $2.13 an hour before taxes. That’s seven dollars I’ve made, again before taxes, in almost three hours.

Minimum wage is $7.25. It’s a good thing I’m putting myself through college, I want to scream at them. It’s a good thing you asked me for about 50 gallons of ranch, barbecue sauce, butter and honey mustard, to sing happy birthday for your daughter and to have your steaks remade because you apparently didn’t know and didn’t bother to ask the difference between a prime rib and a rib eye when you ordered.

Thank you so much for acknowledging the spiel I am actually required to give at the beginning of each visit. There’s nothing like answering: “How are you doing, tonight?” with, “Iced tea, no lemon.”

I am well aware, as is everyone in the restaurant business, that waiting tables is not rocket science. It doesn’t require a degree or long-term training. Waiting tables is one of the only jobs where you’ll find 16-year-olds and 60-year-olds working in the same building. Maybe some people look down on restaurant employee personnel and think that because it doesn’t require extensive training, it’s not a respectable job. But we are servers — not servants.

As a soon-to-be-graduate student, I’ll tell you I’ve met far smarter people working in the restaurant business than I have within the confines of a college classroom.

Being a server requires a keen set of skills. Servers have to be able to think quickly, move quickly, master the art of multitasking, manage sometimes hundreds of dollars at one time, be hospitable, patient and communicate well — more than well. In this military/college town, you run into people from all over the world. So we serve as translators, baby sitters, photographers, accountants, counselors, teachers, body-builders and maintenance repair all in one job. I hope you realize that what we do deserves a proper tip.

Of course there are bad servers working in restaurants everywhere. I’m not asking you to hand out money to servers that don’t deserve it. I’m just asking you to realize that servers make their money from the tips that you leave them. If you can’t afford to tip, don’t go out to eat. In some restaurants, servers have ten tables to tend to, and in my restaurant, we have three. A few bad tips, or no tips, can really make or break our night. In turn, it can make or break our tuition balance, car payment or house note. Fifteen percent of your total bill is what you should leave your server, at the bare minimum, if he or she does a good job.

And if you want to be that guy or girl that leaves your number on the receipt, you might want to go a little overboard on the tip. Two dollars and a “call me” will more than likely get you an angry text, if anything. If you want to be the table that’s having a mini-reunion, meaning you want to sit there for about three hours, please tip accordingly. The server that is waiting on you could have had two or three other tables, so two or three other tips, in the time that you have taken sitting there. Also, never be the person that doesn’t eat. Restaurants are for eating. It’s where you go to be fed. A party of six people with two people eating is costing your server.

Lastly, a sincere thank you from a hardworking server to the lovely guests that are kind and generous enough to take care of us. I’ve kept receipts for years after I’ve spent the tip money, from guests acknowledging how hard I work or what great service they received. You are more appreciated than you know.