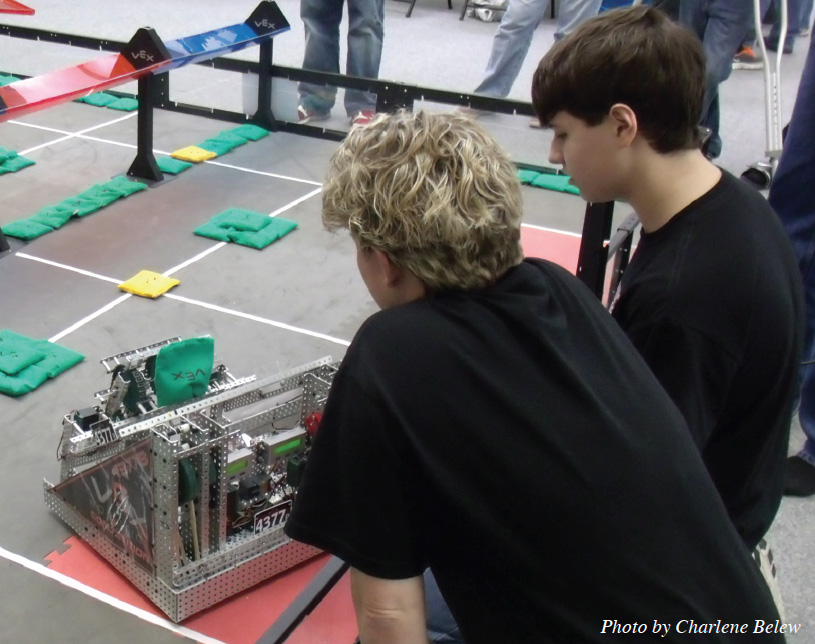 Story by Charlene Below

In Sack Attack, the objective was to score the most points in two minute rounds. There were four robots in each round, two for team blue and two for team red. Each round began with a 15 second autonomous period where students had to pre-program their robot to carry out its own functions to be able to score. After the autonomous period, the competitors used the remaining time of the match to score the most goals by driving their robot through the arena.

On the field, there were five goals for each team: two f loor goals, two midlevel goals and one high goal. The scoring sacks included 98 green sacks and eight bonus sacks. Green sacks scored in the low goals were worth one point, while green sacks scored in the midlevel goals were worth five points and in the high goal worth 10 points. The bonus sacks were worth six points, 10 points and 15 points respectively. The competitor who had scored the most during the autonomous period received a 10 point bonus, and any student who had parked their robot back on the starting square in the regular game mode received a 10 point bonus.

The winners of the match included 14-year-old Braiden Maggia, a student from Purcell Middle School, and the two teams he chose to be in his alliance from the Gigabots group and from the Cyborgs group. Maggia won a Middle School Excellence Award as well as his regional trophy.

“It feels pretty great to win regionals, because you’re going through the whole thing and you’re trying to make sure nothing goes wrong,” Maggia said. “Even during a match, even if the scoring isn’t close, you’re still thinking that something could happen.”

Maggia said this experience helped him realize some things that he could improve upon before the competition in Anaheim.

“We found that there were a few things we need to fix with our robot,” Maggia said. “I’m looking forward to meeting new people at the world’s competition.”

The robotics interest has been a part of Maggia’s family for some time. His brother, the first of the family to pick up robotics, started Maggia’s interest while their mother became a part of the team as the coach.

Mother and coach Melinda Maggia said working with her son has been a bonding experience.

“He tells me exactly what I need to know,” Maggia said. “It works really well because we can spend a lot of time together formulating everything. We strive to be good sports and to learn how to work together, and it’s not always about the winning, but we want him to grow. Programming is the thing he wants to do, and we really need to grow in that area. It is just such a learning experience to go out there and experience the different cultures that will be participating at Worlds.”

At Worlds, the Maggias will be competing against teams from the different region of the country as well as countries around the world, including — but not limited to — Japan, China, India, Canada, Brazil and New Zealand.