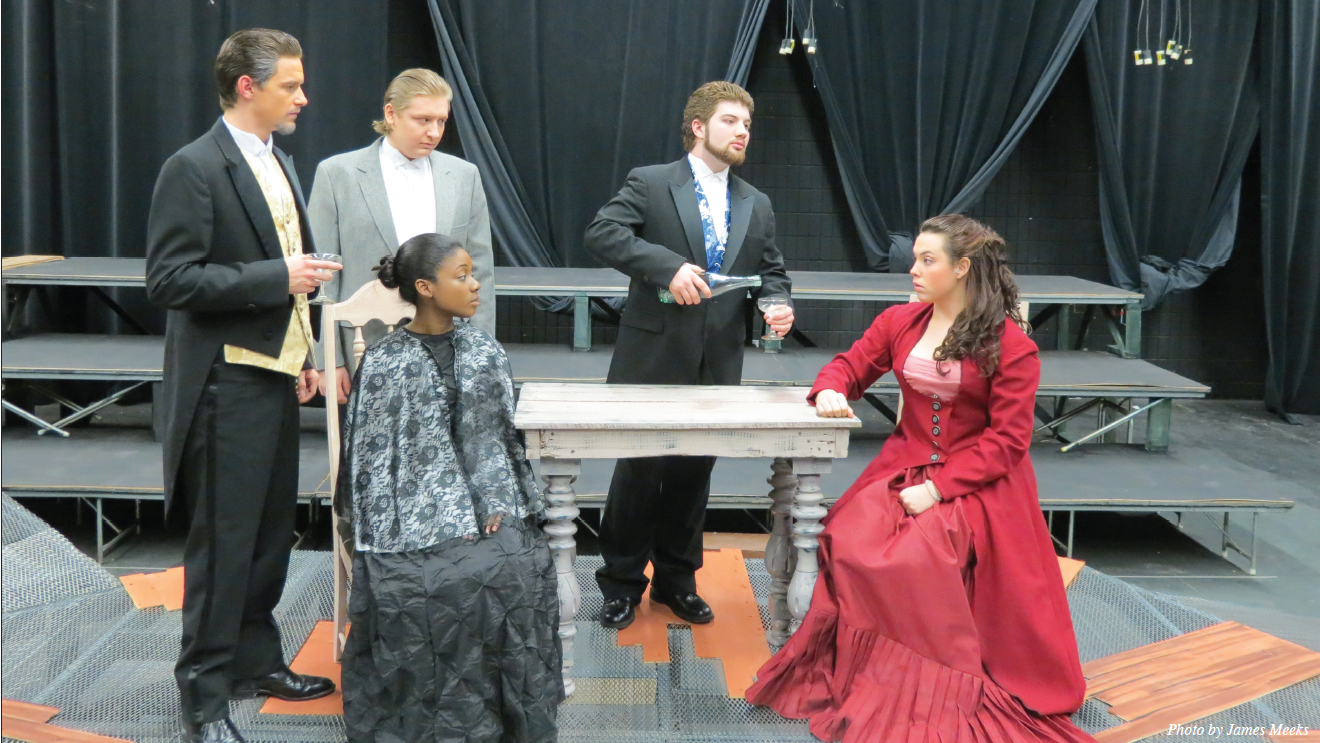 Nora, Ingmar Bergman’s adaptation of Henrik Ibsen’s A Doll’s House, opened at 7:30 p.m. on Feb. 21 in the Cameron University Theater.

In the play, the title character, Nora Helmer, played by Leah Mazur, stands up for herself in a society dominated by men.

The story involves Nora and her husband Torvald, portrayed by Alexander Huff, living in an unspecified town in Norway. Torvald has just received a promotion at the bank, which also included a pay raise.

Because of Torvald’s promotion, one of the employees of the bank, Nils Krogstad, played by Brandon Smith, is being laid off. Krogstad blackmails Nora into convincing her husband to allow him to keep his position at the bank, which sets a series of events in motion that reveal secrets.

Nora does everything in her power to fix the problem without revealing her secret, but while attempting to keep past events in the dark, she learns the true nature of her husband.

Mazur’s portrayal of a normal housewife was truly exceptional. Mazur does an excellent job showing a change in the character from happy and carefree in the first half to an empowered woman who stands up for what she believes in by the end of the production.

Her transformation of the character shows how far Nora has come as a person.

Huff ’s portrayal of the character Torvald is an excellent representation of a 19th century man in a high ranking position at the bank. In his love of Nora, he brings a sophisticated presence to the character and carries a well-mannered, calm tone.

During the climactic scene where Nora confronts her husband, Huff keeps the calm tone with small moments of raising the character’s temper.

Despite these traits, there are times Huff could have let some anger loose during the final confrontation of the production. Loosening his control and allowing his anger to show, then recomposing the posture would have made the climax stronger and believable.

Smith’s fierce portrayal of Krogstad shows how a man attempts to keep his job in order to survive in society.

Smith shows the brutality of the character and his willingness to do what is necessary to make sure he keeps the life he knows. He projects the anger of his character toward the others to make them bend to his will, revealing the fear they project in response to his outbursts. Smith takes his fellow actors portrayal of fear and uses those emotions to further fuel his character’s determined anger to fulfill his agenda.

The two other characters — Doctor Rank played by Brandon Landers and Mrs. Linde played by Ashley Winfrey — engaged in their characters and added to the plot in their own way.

Landers did an excellent job portraying the somberness and somewhat gloomy outlook of the Doctor’s character.

Winfrey’s interpretation of Mrs. Linde made the character a concerned friend for Nora who believed the right thing to do was to tell her husband the truth regardless of what it would cost. Winfrey keep true to that belief throughout the duration of the play.

The story is definitely relevant and shows that a highly tense situation can bring out a person’s true nature.

Nora was an excellent production overall, the first half of the play is a little hard to get immersed in because the characters were trying to establish themselves. Some of the dialogue between Nora and Mrs.Linde feels wordy and dragged out at times, but their exchanges are necessary for revealing their agendas. The second half tied all of the character’s motives together and showed the transformations each character went through.

The next CU Theater Production, Drowsy Chaperone, a musical comedy, will open on April 18.