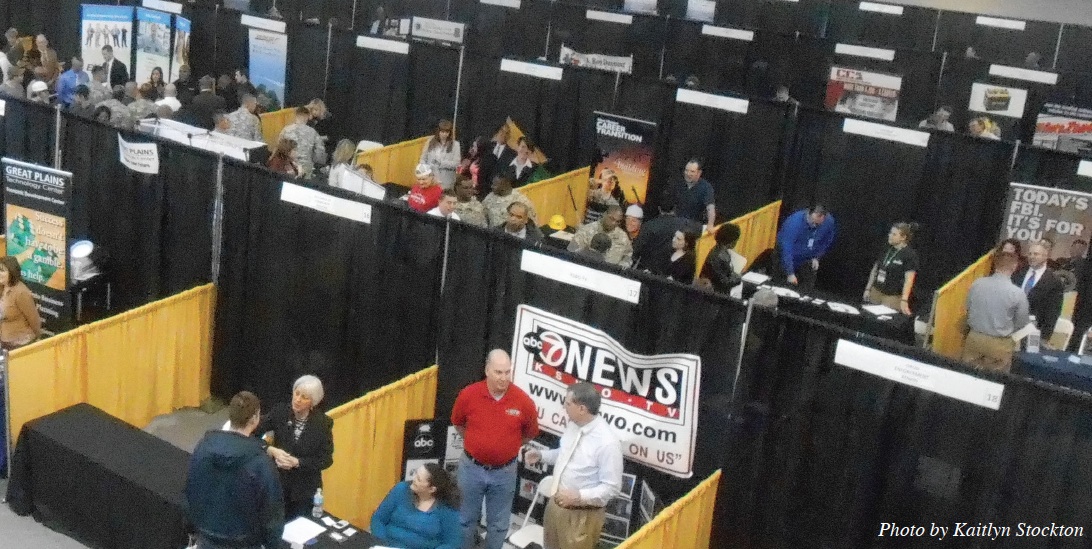 The Red River Career Expo made its 16th annual appearance on Cameron University’s campus on Feb. 19.

The Red River Career Expo welcomed students, alumni and fellow community members to seek out career opportunities from over 75 local and national companies. The expo was held from 12:30 p.m. to 4 p.m. in the Aggie Rec Center.

Employer Relations Coordinator Wendy Locke said the Red River Career Expo is a yearly career fair that offers students and others opportunities to interact with professionals in a variety of fields and companies.

“The Red River Career Expo is an opportunity for employers to make connections with job seekers for both local and national companies,” Locke said. “It is a great event we have every single year.”

Locke said the event is an important staple to Cameron’s campus due to it being born through the university. While the expo is normally a joint project, Locke said this year was the first for Cameron to host it on its own.

“It is original to Cameron. Cameron and the Fort Sill Army Career and Alumni Program have hosted it for the past 15 years. This is actually the first year that Cameron University has hosted it by themselves,” Locke said. “We still had volunteers from Fort Sill, but this is the first year that we have done a lot of the legwork without them.”

Locke said she was excited to have 81 vendors sign up for this year’s career fair. Even though there were a few cancellations due to the weather, she said she was thrilled to have over 76 diverse companies on Cameron’s campus.

“There’s so many different types of industries,” she said. “We had everything from nursing to engineering. We have companies that come year after year since it is such a great, big event for Cameron.”

Locke said she enjoys the idea that anyone is welcome to the expo. With the economy in a low state, she said she did not want to segregate anyone from the opportunity of a job.

“The great thing about the Red River Career Expo is it is actually open to the public. Anybody can come in and look for a job,” Locke said. “In this economy, we do not want to segregate such a big fair to Cameron students and alumni. It gives the entire community a chance.”

As Career Services and Student Development took over the Red River Career Expo, Locke said the group made minor changes from the previous years. She said the group attempted to alter the expo’s logo and signs to include more gold and black for a Cameron feel.

“All the preparations, all the calls, all the business connections were centralized in Career Services. It was housed here at Cameron. We took it and went running with it,” Locke said. “We were excited about all the little changes that added up. It is just the little things that we did that made the event stand out this year.”

Locke said a major goal of the expo is for students to establish connections with recruiters in their field of interests. She said there have been many success stories due to the Red River experience.

“We have had success stories where students have gained connections and did get hired from the expo,” she said. “Some companies said they found some valid candidates. They were looking to hire three to six people from the candidates that walked through. We are making connections for our community.”

Senior Maurice Buckner said he saw the event as a way to experience what careers are available in the Oklahoma and Texas area.

“It opens your eyes to what it out there and what is in this area, considering everything is from here to Texas,” he said. “It just lets you know what the job market looks like.”

“A lot of people said this is the best Red River Career Expo we have been to,” she said. “I was nervous about the steps up to the event and making sure everything ran smoothly. I was very happy with the turnout. We received so many compliments that it just makes me that more excited about next year.”