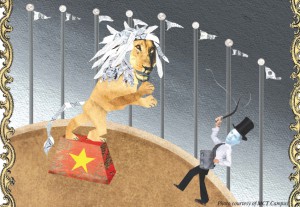 The Great Plains Coliseum was recently filled with the sights, smells and sounds of the Jordan World Circus.

On Feb. 18 and 19, the circus performed two shows, one at 4:30 p.m. and another at 7:30 p.m., allowing time before, during intermission and after the shows for the audience to mingle with certain acts and special features – such as face painting or getting a picture taken with one of the tigers.

The three ring circus was led by Devin Chandler, the Singing Ringmaster, who not only introduced the acts with well executed posh and pizazz, but showed off his voice as part of his own magic act. Chandler and his assistant — his wife, Sarah — performed multiple tricks as they moved from one ring to another across the circus floor: from a disappearing act, to a sword impaling act and finally an escape routine that culminated with Chandler, who was handcuffed inside a locked chest, trading places with his wife who was standing on the chest. Chandler, while entertaining, proved to be just the beginning of the talent.

The circus boasted a large pool of acts and performers, some of whom performed multiple routines or in multiple acts. A crowd favorite was Ulises, who first performed a solo routine inside “The Wheel of Wonders,” a giant rotating arm with a large metal wheel on one end in which he had to maintain his balance; the audience next got to see him on the high wire with another performer, Johnny, and together they captivated the audience with their feats of aerial balance and finesse.

These death-defying feats not only took place in the air — some of the most exciting routines took place on the ground and involved some mode of wheeled transportation.

Karoly Zeman showed the audience what could be accomplished with BMX bike routine and practice; for his finale, he rode down a ramp at one end of the arena, up another ramp at the other end and completed a full backflip before landing. There was also a motorcycle routine that ended with “The Doorway of Doom,” and the cyclist seemed to ride his bike through his assistant who was chained in place inside a door frame during the climax.

Lastly, the DeSousas, a roller-skating couple, performed tricks of speed and balance, spinning and swinging each other on a platform in the center spotlight.

The comedy duo of Kampanita & Kampanilla kept the audience laughing while circus workers would either remove or emplace large pieces of equipment for the routines. Both clowns invited the audience to participate at different times during their routine: from having the two sides of the audience compete for which side of the arena could yell the loudest, to clapping in rhythm as they danced to Psy’s “Gangnam Style.”

Besides a couple song and dance routines that featured many of the female performers in glittering costumes, there were some specific acts where the ladies got to show off more than their dancing skills.

The “Liberty Lovelies” performed a routine of grace and strength as they clung to ropes suspended from the ceiling and later took to the skies — this time using silk ribbons and suspended hoops — performing a routine to Rihanna’s “Diamonds.”

One of the biggest draws of the circus were the animals. For a small price, children and parents were able to experience riding either an elephant, a camel or a pony as they waited for the circus to begin and then again at intermission.

There were various acts that starred animals: a tiger troupe, two routines orchestrated by Ms. Laura Harriott — the first being a dog routine, the other was a routine that featured various exotic animals called “Storybook Animal Fantasy.” The last routine of the night was the elephants. Under the direction of Habib and Mychelle Omar, the elephants performed feats like sitting on seats, lying down on command, standing in a row and carrying the Omars with their trunks.

Lisa Gladwell, Cache resident and a first year graduate student pursuing a Master’s degree in Education and Reading at Cameron University, took her family to see the early show on Feb. 18. As a mother of six, she said she was pleased with the circus because it provided a wholesome activity for the family to experience together.

“We went to the circus the last time it came to town,” she said. “It’s always something fun to do with the kids.”

Sadly, Gladwell said she is upset by the fact that not enough of the events that make it to the Great Plains Coliseum are theatre related.

“I wish we had more traveling Broadway shows,” Gladwell said. “I would like my kids to experience ‘Le Miserables,’ or ‘Phantom of the Opera.’”

But while she’s waiting for that day to come, Gladwell said she plans on taking her family to the circus every time it comes to town.