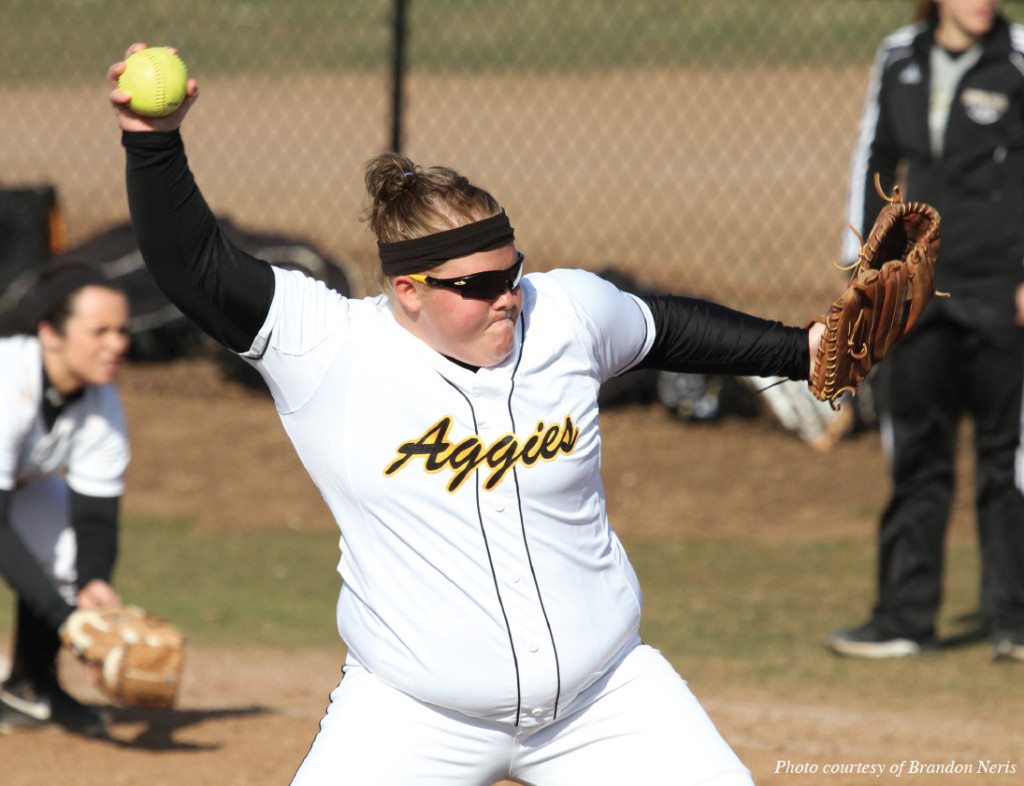 After starting the season 3-9, Cameron University’s softball team looked to gain momentum in a doubleheader March 2, against The University of Science and Arts of Oklahoma Drovers in Chickasha, and another back-to-back matchup against the Southwestern Oklahoma State Bulldogs on March 6 in Weatherford.

The first game against USAO saw the Aggies bats come alive as they produced 12 runs and put the Drovers away 12-0 in five innings. Junior pitcher Samantha Betts was equally impressive as she took the circle and carried a no hitter through the first three innings and finished with seven strikeouts and a one-hit shutout.

The Aggies started slow in the first inning with no runs scored and one left on base but picked up the pace in the second when senior catcher Sonia Foutch reached on an error and freshman Sonora Zukerman hit a two-run blast to give Cameron a 2-0 lead.

Martini led the Aggies on offense going 2-4 at the plate with five RBIs, one run scored and a home run. Junior outfielder Tara Martini finished the game 2-3 with 3 RBIs and a run scored while Zukerman finished 1-4 with two RBIs.

The Black and Gold found themselves in a nail biter in the second half of the doubleheader. Both teams struggled at the plate and ultimately the Drovers outlasted the Aggies and USAO pulled out a close 1-2 win.

The Aggies were able to get on base with nine hits and two walks but were unable to bring anyone around and left at least one runner on base in six of seven innings.

Cameron scored the first run of the game in the top of the first inning as a T. Martini ground out brought home senior outfielder Claren Hurlbut. The Aggies held on to the slim lead until the bottom of the fifth inning when the Drovers’ Sara Reeves singled to center field bringing in Kayla Adams to knot it up at one run apiece.

USAO struck the decisive blow in the bottom of the sixth inning on a double down the left field line from Taylor Smith sending Katie Jirak home from second base. The Drovers held the Aggies scoreless in the top of the seventh and came out on top 1-2.

After splitting 1-1 against USAO, the Aggies traveled to Weatherford to take on SWOSU. The Black and Gold played spoiler to the home team and took both games of the doubleheader 6-1 and 6-5.

Once again CU pitcher Samantha Betts put on a clinic going seven innings of one run ball with nine strikeouts. Neither team was able to get anything going at the plate until Cameron exploded with four runs in the top of the fifth inning.

With two outs and freshman Spencer Ferrell on second base, T. Martini singled into left field advancing the runner to third. An error by the Bulldogs’ third baseman put L. Martini on first and brought Ferrell around for the first run of the game. After another SWOSU error put S. Foutch on to load the bases Zukerman cleared them all with a three-run double putting the Aggies up 4-0.

The Aggies scored one run in the sixth and added another in the top of the seventh inning and went on to secure the 6-1 win. Zukerman led the Aggies with three RBIs while Ferrell finished 3-4 with an RBI and one run scored.

Cameron had a tough battle on their hands the second game of the doubleheader and held off the Bulldogs, 6-5. The Aggies used a quartet of pitchers to get the victory with junior pitcher Kelsy Hebert recording the win.

Game two started off similar to the first with both teams unable to get on the scoreboard through the first two innings. The Aggies got the ball rolling in the top of the third, plating three runs but the Bulldogs answered right back with three runs of their own.

Both teams were held scoreless in the fourth and in the fifth inning CU scored two runs on a jack from Zukerman scoring L. Martini. In the bottom half of the frame SWOSU was able to get one back and scored a run again in the bottom of the sixth inning to bring the score within one.

The Aggies ended the top of the seventh with three left on base but were able to retire the first three batters faced to hang on to win 6-5.