Voices: ‘Tis the season to be greedy

The holidays are now upon us. With Thanksgiving (and the ever infamous Black Friday) over and done with, we find ourselves looking ahead to Christmas, when gifts and greed are abundant. However, the holiday seasons have turned us as a society into a terrible, monstrous group of people willing to punch out and destroy anyone in the way of our getting the hottest gifts.

My experiences with Black Friday began four years ago while waiting in line at 5 a.m. for a gift I was supposed to get for my nephew. While waiting in the line for four hours, I noticed that things were not well. With 15 minutes before the time for sales to start, a fellow customer ripped off the plastic surrounding the mp3 players, and all hell broke loose.

One customer was punched in the face that year, but that was not the worst that happened.

This year, I managed to avoid Black Friday, and I am more than just a little proud about that fact. This year featured violence across the nation, all in the name of not entirely good deals: two people were shot over a parking space in Florida outside of a Wal-Mart, a line-cutter had a gun pulled on him in San Antonio after punching another customer in the face and workers from Wal-Marts across the nation decided to picket the store for beginning their Black Friday sales on Thanksgiving. In short, things got ridiculous fast, and no one found themselves truly prepared for the onslaught of craziness that ensued.

So, where do we go from here? Personally, all the people who partake in Cyber Monday make a lot more sense than those willing to put themselves in harm’s way for the Wii U (as awesome as it may be, I would rather not find myself in a fist fight to get one).

The responses to Black Friday from small businesses and online sellers have been quite extraordinary. In fact, I participated in Small Business Saturday this year, despite my aversion to being in public in the three days following Thanksgiving.

If I were to suggest anything, it would be to find other routes (like the ones I have so far suggested) instead of going to big retail chains and getting in the crosshairs of a frenzy of wicked customers all looking for the same things.

Black Friday and the weekend post-Thanksgiving are only the start, though. With Christmas in the near future, going out in public is just a scary venture when looking for anything to buy your best friends or family members for the holidays. Speaking as a man who used to work in retail, the most people I saw shopping were on the last two days leading up to Christmas.

With fewer and fewer things available as everyone continues to buy out the stores, customers become more and more infuriated when they find out that whatever they are looking for is not available any more.

So, with all of this in mind, I think what we all need to learn is that the holidays are not a time for gifts. Sure, gifts are exchanged and given during the season, but they are not the focus.

Despite the fact that some friends of mine became annoyed with my posts on Facebook during November about the many things I am thankful for, I still strongly believe that the holiday season should be about being thankful. The holiday season is about the bonds we have with one another, about the many great things within our lives and about happiness in general. It sounds cheesy, but that is what I believe the holidays should be about. We should not spend our time bickering and fighting over stupid gaming systems and gifts while in long lines at Wal-Mart, but should instead focus on the things we already have and the people we have in our lives. If we can just start to do that, then maybe all the craziness from the Black Friday sales will cease. Happy holidays, everyone. 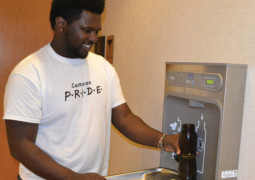 0 thoughts on “Voices: ‘Tis the season to be greedy”