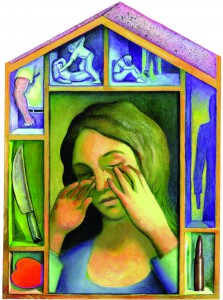 Most people associate October with Halloween, pumpkins or football. For me and so many others, however, October is much more than candy and costumes. October is National Domestic Violence Awareness Month.

The fall winds of these 31 days bring on a whirlwind of emotion as we reflect, commemorate, listen and protest. As a victim of domestic violence, I hold this month close to my heart, but the additional 11 months of the year are just as vital in spreading the word of healthy relationships. Just as anyone can be a victim of violence, anyone can be an advocate of peace. As in any walk of life, knowledge leads to the power of change.

While there are several definitions for domestic violence, it is essentially the infliction of pain, physically or mentally, by a person that maintains an intimate relationship with the abused. The National Coalition against Domestic Violence reports that it is one of the most under reported crimes in the country.

Research continuously proves what a serious issue domestic violence is, yet America is slow to act upon the evidence. In fact, the month of October was not founded as National Domestic Violence Awareness Month until 1981. Here in Oklahoma, animal cruelty is a felony — domestic violence cases involving actual human beings however, are most commonly filed as misdemeanors.

This April, provisions were made to the Violence Against Women Act. Then-senator Joe Biden originally drafted the act, which President Bill Clinton signed into legislation in 1994. The act has provided money toward the research, investigation and prosecution of violent crimes toward females. This piece of legislation has also required mandatory restitution fees be paid to battered victims. The provisions were created with the intent to extend the Act’s protection to victims of same-sex partnerships, as well as illegal immigrants who encountered abuse. Conservatives, unsupportive of the idea that every victim deserves justice despite personal circumstances, have not favored the provisions. The Act has yet to be renewed.

Domestic violence is a crime so often disguised with gifts and apologies — and unique in that there is an emotional bond between the offender and the offended. For these reasons, there is no simple solution; however, educational programs, safe havens, psychological and financial support are extremely critical in the ongoing battle we face. The sooner people are able to learn about and grasp the reality of domestic violence, the better chance we have of breaking the cycles of abuse.

I will stress that I do not believe there are enough preventative measures taken among the American youth. Awareness workshops and classes should be taught at schools, and more than once a year. I emphasize out of experience how important it is to have more than one outlet. The most powerful remedy to this type of victimization is support.

So as shades of red, orange and yellow begin to cover the trees, and autumn decorations line the aisles everywhere, I hope to see tones of purple on display as well. The lavender ribbons brought about during this month of observance may be delicate and small, but the great strength and significance they represent is beyond measure.