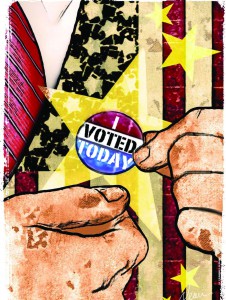 This presidential election will be the first in which I am old enough to cast my vote. It marks my first opportunity to have my voice heard as to who I think should be the next President of the United States. In other words, it is kind of a big deal.

I feel as though society wants me to believe that parades should be marching me off to the voting booths, that trumpets should be sounding as I check the box that possibly determines my nation’s next four years and as though confetti should fall from the sky as I exit, a triumphant smile crossing my face as a feeling like I just made a difference in the world grows within me. There should at least be fireworks, right?

However, with less than two months until Election Day, I still have not registered to vote.

The trouble is that I struggle with believing my vote counts in a state that literally bleeds red. We are talking about Oklahoma, a state that has not voted blue since the 1960s.

I realize my stance is not a popular one within an educated community. It is considered the result of an apathy opposed to a grasp on realism. I am told that if I do not vote, my political opinion does not matter. In essence, I have chosen to stifle my own voice.

However, I feel that if a person votes for the sake of voting, they never really had a solitary voice at all. They are simply an insignificant piece of a human assembly line that has been manufactured to help make sure our “democratic” reputation is upheld.

It is time to face a harsh reality; a vote cast is not necessarily a vote counted.

And should a vote compliment of a person uneducated on the issues upon which they are voting count anyway?

A 2003 Yale study revealed that people often vote more consistently with their party as opposed to their personal beliefs. These results completely undermine the concept of voting.

Is it truly freedom when the vote you cast is not your own?

The right to vote is a privilege that is not extended to every American. While it is indeed an important right to exercise, I feel that we have forgotten that it is within our freedoms to choose not to participate at all.

This is not to say that I will never vote, or that I will disregard politics as unimportant. Honestly, I would like to think of myself as a decently politically aware person. I laugh at all of Jon Stewart’s jokes; I even get most of them.

Perhaps it is a matter of me forgetting that “getting the joke” may mean I am educated enough to understand the punch line, but that it can also detract from my ability to critically analyze the argument hiding behind the humor.

Perhaps my vote, not willingly cast in favor of my own ideas, but coerced by societal expectation in favor of a man considered the “lesser of two evils” does matter somewhere on a much grander scale.

Regardless, as Election Day draws nearer, I find myself more certain that the odds of my vote mattering in favor of either party is unlikely. Freedom to choose is freedom to choose not to vote; it is not the choice between two imperfect parties.

Despite my actions, I encourage every person to register to vote, to vote and to have your voice heard.

However, when it comes to voting in this election, I think I will exercise my God-given right to not.