580 Rollergirls: Providing entertainment and giving back to the community 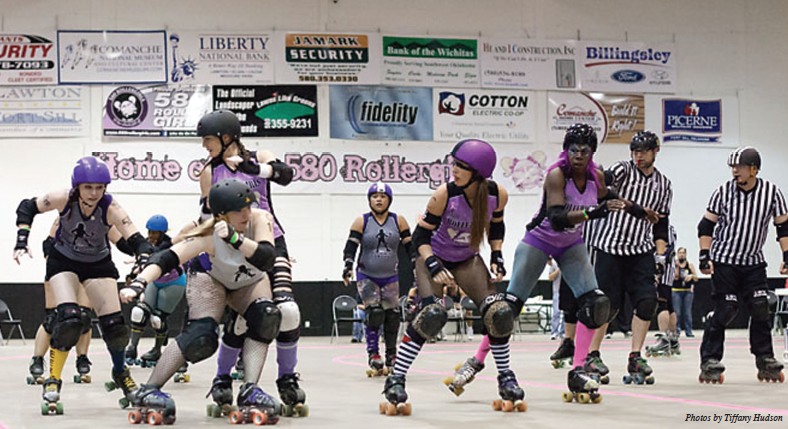 Rough and ready: The 580 Rollergirls bring lots of
action to their roller derby fans. These ladies have also
brought much funding to several community agencies.

Skull and crossbones are synonymous with the Lawton 580 Rollergirls, a local roller derby league, and the presence of this team has surged with community spirit and philanthropy with each of their knockdown, drag-out bouts.

But the 580 Rollergirls do more than push each other around on the track; they lend a hand to local non-profit organizations through fundraisers and volunteer in community events.

The Lawton 580 Rollergirls first hit the scene back in October 2010, when founding member Christi Chambers began telling others how much she was enjoying skating with the Red Dirt Rebellion Rollergirls in Oklahoma City.

Her enthusiasm soon became infectious, and after meeting with other women who also wanted to form a league in their own, they assembled a team of female athletes who made their mantra “‘til the wheels fall off.”

Chambers said supporting charities has also been their objective since the beginning.

Senior Psychology major Kaley Meyer, known as “Trigger Trixie” on the track, said she was pleased to the see the girls she had befriended at the Marie Detty Youth & Family Services Center cheering her on.

“We actually went there the other night and played board games with the girls, and they are here tonight to watch us play,” Meyer said. “We give to them, but they give so much to us. We really enjoy being involved as much as we are.”

Crystal Morris or “Riga’Morris” when blocking in jams currently serves on the sponsorship and raffle committee, asking local businesses for donations for their raffle.

“We want to our efforts to be tangible and impact the people we talk to all the time,”

Last June, the Lawton 580 Rollergirls worked with Southwestern Medical Center and Comanche County Memorial Hospital to promote cancer awareness. They sold pink T-shirts and set aside part of the proceeds for cancer research.

According to Morris, their contributions to the cause made a visible impact.

Morris said the Lawton 580 Rollergirls have even joined forces with their opposing team on one occasion to contribute to another cause, much to their surprise and delight.

“One time — the last time we had a fundraiser for the Lawton Food Bank — the team that came from Kansas City found out and brought a car load of groceries with them. When representatives from the Lawton Food Bank came to set up their table, it was already full of food,” Morris said.

Off of the track, the Lawton 580 Rollergirls have participated in several events, such as the Arts for All Festival and the Mayor’s Blues Ball in Medicine Park. They also socialize with veterans at the VA Center during their monthly Monday Bingo Night.

The Lawton 580 Rollergirls are planning fundraisers for the Humane Society for their next bout.

0 thoughts on “580 Rollergirls: Providing entertainment and giving back to the community”