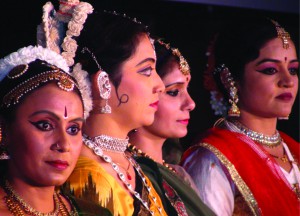 Professionally-trained dancers gaze into the audience before dancing three of the most prominent dance forms in India. Bright dresses and bells added visual and musical vibrancy to their performance.

The Cameron University School of Business hosted its annual India Night event at 6 p.m. on Oct. 6 in the McMahon Centennial Complex’s McCasland Ballroom.

The goal of India Night was to bring greater awareness about India to the Lawton community and strengthen the relationship between the United States and India, the world’s two largest democracies.

Cameron University President Cindy Ross gave the opening statement by welcoming the guests to the event. She emphasized the role played by the Bhargavas in providing lectureships to educate CU students, and she encouraged the audience to appreciate the efforts of Dr. Ajay and Shireen Bhargava.

“Dr. T.K. Bhattacharya initiated the India Night and it is possible through the extraordinary generosity of Dr. Ajay and Shireen Bhargava,” President Ross said. “They have funded three endowed scholarships which have opened doors of education to many students.”

The Dean of the School of Business, Dr. Oris L. Odom introduced the keynote speaker, Dr. Amit Gupta. He is an Associate Professor in the Department of International Security Studies at the United States Air Force’s Air War College in Montgomery. He is also an external researcher for the Strategic Studies Institute of the United States Army War College. Most of Dr. Gupta’s research and publications have focused on weapons proliferation, arms control, South Asian security issues, globalization and Australian security policy.

Dr. Gupta discussed the main economic opportunities that are available to India in the coming decade and also the challenges that can potentially derail India’s attempts to develop economically. He stated the emergence of India as a big economic and military power. He also mentioned the implications of the United States strategic and economic interest in the South East Asia. He said India is beginning to emerge as a major player in world affairs.

He said to talk about global politics and know how the world would transform, the interaction between the United States, China and India should be observed.

Ajanta Cuisine of India, an Oklahoma City restaurant, served the audience a variety of India dishes and delicacies.

Professionally-trained dancers and choreographers from Oklahoma, Texas and Georgia perform Nritya Sangam, a fusion number that combined Indian and classical folk forms, and then danced three of the most prominent classical dances in India: Nharatnatyam, Kathak and Odissi.

Dr. Syed Ahmed, a Professor of Economics and Director Bill W. Burgess, Jr. Business Research Center Director said they decided to have something different than the normal classical music they had used in previous years.

“This is the first time we would invite a renown dance troop,” Dr. Ahmed said. “We have always had classical music performances in the past India Nights.”

The last performance was a dance by all the leaders of the dance troupe. They did the Nritya Sangam by bridging gaps through dance.

The event ended with a closing remark from Dr. Syed Ahmed. 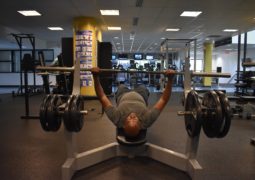