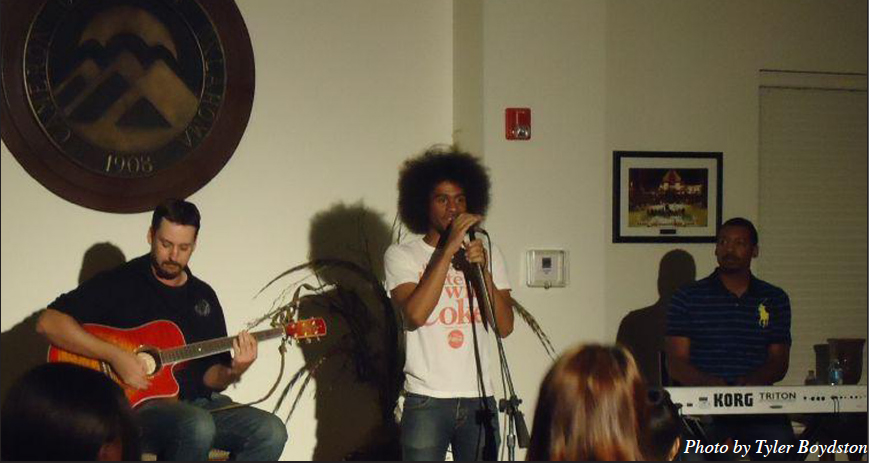 A former contestant from NBC’s TV show “The Voice” recently came to Cameron University to perform a set of songs and interact with students.

Tje Austin, a contestant from the show’s first season, came to perform on April 10 at the McMahon Village Center.

Austin explained that, during his time on “The Voice,” he saw the lifestyle of a celebrity while also focusing on the competition.

“It was a glimpse into the Hollywood lifestyle,” Austin said. “They really treated us like we had already made it. It was nice to not have to worry about food. They took care of everything and just wanted us to worry about the singing. They introduced us to vocal coaches, went to recording studios in L.A. and, of course, I got to meet Cee-Lo Green.”

As a part of Team Cee-Lo, Austin managed to work with the singer during his time on the show.

“Cee-Lo reminds me of a guru,” Austin said. “He’s very wise and even sage-like. He speaks very softly and you have to be really quiet to listen to him. He’s very relaxed and chill, and also encouraging.”

Being a contestant of the show’s first season, Austin realized the risk of the show not making it to air.

“I think it was a different beast with season one,” Austin said. “They were trying to wrap their heads around it and what they really had. There was so much fun, but so much anxiety at the same time. No one knew what would happen with the show, and I thought that with my luck, the show would get cancelled before it aired.”

Austin explained his set list, which included a mix of both cover songs and songs he had written himself.

“I like sharing my original music, and I love it when I get a good response,” Austin said. “I like doing cover songs, too they’re my chance to force my favorite songs on people. It makes it fun when people hear something they can recognize. I love Coldplay, Jack Johnson, Adele. I like mellow music, but more than anything I love voices that are pure.”

Austin has managed to go to different venues each month in different areas, though he’s based in the Texas area.

“We go to events about three to four times a month,” Austin said. “We perform a lot in Austin, but we’ve been trying to branch out and do a lot of travelling. “

“I always look for moments when I’m on YouTube where artists do something that make them look more human,” Austin said “There was one I found of Usher where he drooled a little bit. I can watch and tell myself that it doesn’t only happen to me.”

In his performances since leaving “The Voice,” Austin has seen different crowds, but still manages to keep the same mindset going into each venue.

“You never know what to expect night to night,” Austin said. “Whether it’s for two people or 2,000, as long as somebody connects, then I’ve done a great job.”

Austin also gave advice for others wishing to get into the music business, regarding rehearsals and preparation for performances.

“I don’t really know any secrets of the trade other than practicing,” Austin said. “Every show is a new show, so you really want to give it your all. You have to be under the assumption that some people don’t know who you are, and you want to convince them that you’re the real deal.”