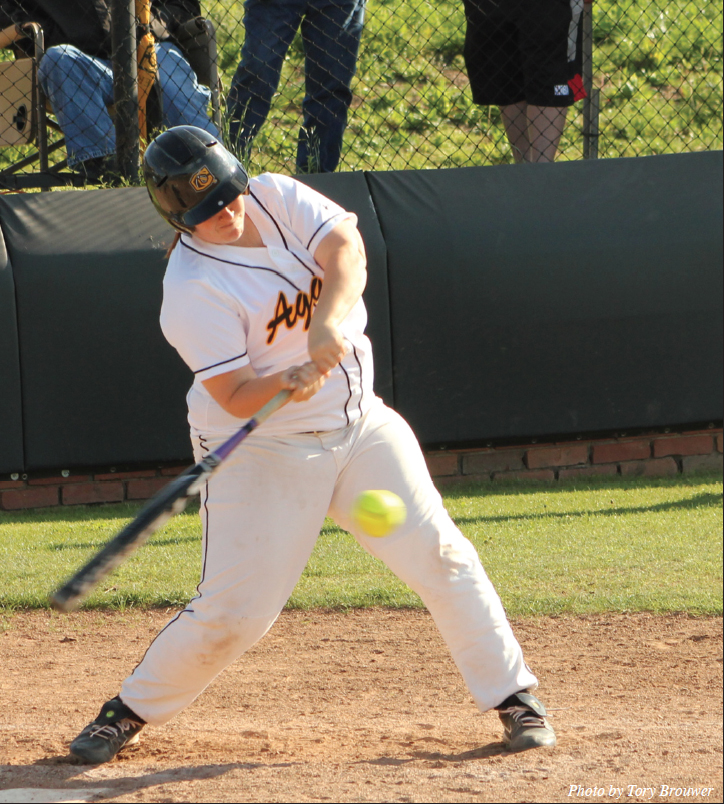 The Cameron Aggie Softball team played the ladies of Texas A&M-Kingsville in a three series game that started Friday, March 30 with a doubleheader, and ended with the final game on Saturday, April 1.

After losing the first game Friday 7-6, the Aggies came back in game two with a 7-4 win.

Head Coach Beth Watson was proud of her team’s ability to fight back and get a win in the doubleheader Friday.

“I like how our team continues to fight, no matter the situation,” Coach Watson said. “We didn’t win game one, but we fought to the end. It was nice to get the victory in game two, and we needed that after some tough losses earlier this week and today.”

Cameron (14-21, 5-9) had a promising start to game one scoring first as freshman Misty Dooley scored on a single to centerfield from fellow freshman, Tara Martini. Kingsville (14-20, 3-11) responded with a run on CU starter junior Cheyenne Brown.

The Aggies came back in the second inning to take the lead again as junior Amanda Karth scored on an illegal pitch.  However, the Javelinas were able to pick up three hits, scoring three runs in the bottom of the second taking a 4-2 lead.

Up until the fourth inning the score remained the same. Dooley continued to be a key player leading the inning off with a walk, and a score on a big double to centerfield fence by junior Drew Wright.

The game continued to go back and forth, with Kingsville leading 6-3, fueling Cameron to make the comeback.

Martini started a two-out rally in the final frame with a double to right field, while junior Sonia Foutch followed with a single, scoring Martini and cutting the lead to 6-4. Next up Karth followed with a big hit to put the tying run on base for CU. Freshman Tiffany Freeman then hit a double deep to left field, giving Foutch and Karth the chance to score putting the game at 6-6.

The extra frame was led with a single from Dooley, however Cameron was unable to comeback and the Javelinas were able to seal the 7-6 victory with a hit to left field.

In game two, sophomore Kelsey Hebert took the circle and picked up her fourth victory of the season. Although she allowed 14 hits, Hebert made big pitches at the right time and limited the Javelinas to four runs.

Coach Watson is proud of the progress Hebert and Foutch are making.

“Kelsey (Hebert) is improving every time she gets in the circle,” Coach Watson said. “And Sonia called a great game behind the plate. They worked really well together.”

The third inning of game two was where Cameron unleashed the fight to win, scoring all seven of its runs with two outs during the frame.

Junior, Leah Trousdale led the Aggies with a single to left field and moved to second once freshman Micah Foutch was hit by a pitch and moved to first.

Next up Martini loaded the bases with a single up the middle, and with the help of Karth’s RBI walk brought in the second run of the inning.

Following Karth, Sonia Foutch was also hit by a pitch, giving her the free base and RBI, keeping the bases loaded.

Freshman, Tiffany Freeman doubled to clear the bases and picked up three big RBI and junior Megan Bell picked up the final RBI, scoring Freeman. After the run scored, Bell was thrown out while advancing to second base.

The Black and Gold’s hard hitting third inning was too much for the Javelinas to overcome. Kingsville struggled over the next five innings to score only four runs and fell 7-4, ending day one of the series.

The next day Cameron was unable to obtain the series victory, coming up just short in the rubber game 5-4 against Texas A&M-Kingsville.

This game was one the team really needed said Coach Watson.

“This was a game we needed,” Coach Watson said. “We had the chances … we just didn’t make the most of the opportunities.”

Hebert pitched the final two innings, allowing only one hit and no runs, the loss drops her record to 7-11 for the season.

In the top of the third Cameron took the lead 3-2, with Dooley leading the inning with a single and scored on a wild pitch. Sonia Foutch knocked in a run, scoring her sister Micah Foutch on a double to right field.

Kingsville took the lead back in the bottom of the third 5-3.

Sonia Foutch picked up another RBI for the game in the fifth inning, doubling to left field allowing Wright to score, putting the game at 5-4 where it stayed till the end.

The team played well, but was unable to get over the hump when it was needed Coach Watson explained.

“We played well defensively, we just couldn’t get the big hit when we needed it,” Coach Watson said. “Each conference game we play is getting more and more important.”