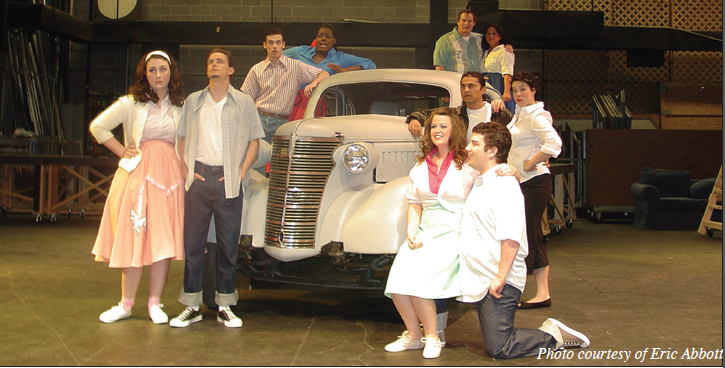 Director Scott Richard Klein said that he was excited to do “Grease”. He said that the story is very captivating: a love story about a boy from the wrong side of the tracks falling in love with a goody-good girl and how they finally get together along the course of their senior year in 1959.

Eric Abbott, the Costume designer for the productions at Cameron, explained that the musical is slightly different from the movie and will be a pleasant surprise to all who go see it.

“A lot of the songs in the movie do not exist in the play; they were rewritten to focus more on the two lovebirds John Travolta (Danny) and Olivia Newton John (Sandy),” Abbott said. “The original musical is not just about those two people, because all the other characters are just as important. It is going to be a lot of fun.”

Abbott further explained that the play and the movie have a tonal difference that audiences might not expect.

“There will be songs the audience knows like ‘Summer Lovin’’ and ‘We Go Together’ that were put in the movie from the original play,” he said. “It is definitely a little more grown up than most people think. It is not the kids movie that you see.”

Klein said that he decided to keep all the original songs from the musical, except All Choked Up, which was not that popular. Keeping the flow of the story, he was able to acquire the rights to the better-known song from the movie, “You’re the One That I Want” and weave it into his version of Grease.

Abbott designed the productions and costumes, as well as supervised student designs. Theatre majors, non-majors, and volunteers made the costumes under the direction of Abbott. Two student designers were chosen for Grease: Brandi Goldsmith for hair design and Alex Huff for make up design. According to Abbott, the costumes will reflect the outfits of the era, similar to a 1950s television show where things are a little too perfect, but not quite cartoony.

Musical Director Greg Hoepfner taught the actors the music and songs while also conducting the band. He said he is thrilled with the unique musical portion of Grease.

“I really like the choreography we have going, it is real exciting, real powerful. I like the musicians we are using now too,” Hoepfner said. “It is basically a rock band: guitar, bass, drums, and piano. They are really good musicians with the good rock and roll music and fun choreography.”

Klein, along with Hoepfner and Choreographer Emily South, was in charge of the casting for Cameron’s production of “Grease.” He said that they were looking to cast people that were suitable for the roles, focusing on singing, dancing and acting ability. The cast was chosen specifically and Klein said he is very happy with their decisions and anxious to see the audience’s responses.

“I am always excited to see the audience’s reaction to everything. When they view the show, I sometimes spend more time watching them than I do watching the play,” he said. “I like to see if all the jokes we put in are working and if they can hear everything okay.”

Cameron students wishing to see “Grease” can receive one free admission with their CU ID.  The charge for non-Cameron students ages 18 and over is $18 and for people under the age of 18, military, or senior citizens is $12.