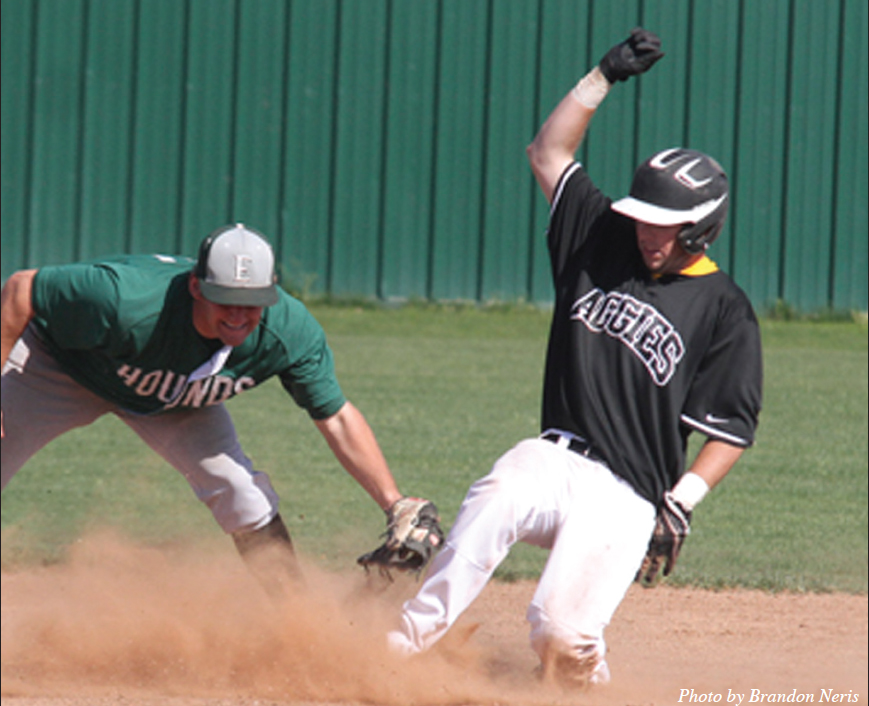 The Aggies took the Greyhounds out in a four game series with three of the games being walk-off wins.

Game one for the Aggies started out with Taylor Lyons hitting a lead off double to start the Aggies off with a man in scoring position. Josh Dawson was next up to bat and kept the Aggies alive with a single. Brad Blumer hit into a groundout double but not before Lyons crossed over home and credited the Aggies with their first run of the day.

Eastern New Mexico responded in the top of the second tying the game 1-1.

There was no scoring action until the top of the sixth when the Greyhounds scored their final run to bring the game to a score of 2-1.

The Aggies fought back in the bottom of the seventh when Tyler Cox scored off an error by the second baseman and tied the game to send it into extra innings.

Blumer came to the plate for the Aggies after a defensive stance earlier in the inning and again hit a single to get on base. He advanced on an error committed by the Greyhounds third baseman. Blumer scored the game-winning run as the Greyhounds second baseman could not handle a ball hit to him by none other than the man who tied the game, Tyler Cox.

The Aggies took game one with a final score of 3-2.

The Aggies head coach Todd Holland said the Aggies played well but needed some work at the plate.

“I guess a win is a win, but there are better ways to win,” Coach Holland said. “You’ve got to take advantage of the opportunities throughout the game. I hope this sparks us; we’re really passive at the plate. We need a better approach.”

Game two for the Aggies started off with a bang as Lyons, Blumer and Andy Garcia all crossed the plate in the first inning.

Eastern New Mexico battled back in the second and third inning scoring one run in each.

The Greyhounds set up the game for a comeback as they scored two runs in the sixth to bring the score to 4-3 in their favor.

With bases loaded in the bottom of the seventh Kevin Waukau stepped into the box and finished the night off for the Aggies with a walk off single.

Day two for the Aggies came out with the exact same result as they finished with the sweep winning game three and four with scores of 9-0 and yet another walk off game 5-4.

Game three for the Aggies was a shutout as starter James Rhodes pitched a complete game allowing only four hits.

Coach Holland was astounded with the game Rhodes pitched and the way the Aggies pulled out the W.

“Rhodes pitched a great game for us today,” said Holland.

Game four for the Aggies was another nail biter as it came down to the bottom of the ninth inning.

The Aggies were down 4-2 going into the bottom of the ninth and next up the plate was Andy Garcia. Garcia led off the inning with a single to right, followed by a shot to shortstop by Waukau.

Nick Smith was next up and reached on a bunt laid down the third base side.

Cox then came to the plate and hit a single straight to center sending both Garcia and Waukau across the plate for the Aggies to tie the game 4-4.

Benshell Garcia followed that with a shot to right field and put the game-winning run in scoring position on second. Taylor Lyons drew a walk and set the stage for Josh Dawson. Dawson delivered the game winning single scoring cox for the Aggie victory, 5-4.

Coach Holland was pleased with the way his Aggies came ready to play ball but said they still have some work to do.

“It’s always good to play at home,” Holland said. “It seems like the last at-bats always win games. We just lost two like that in Canyon (West Texas). I am happy about our four wins, but we could have done more.”