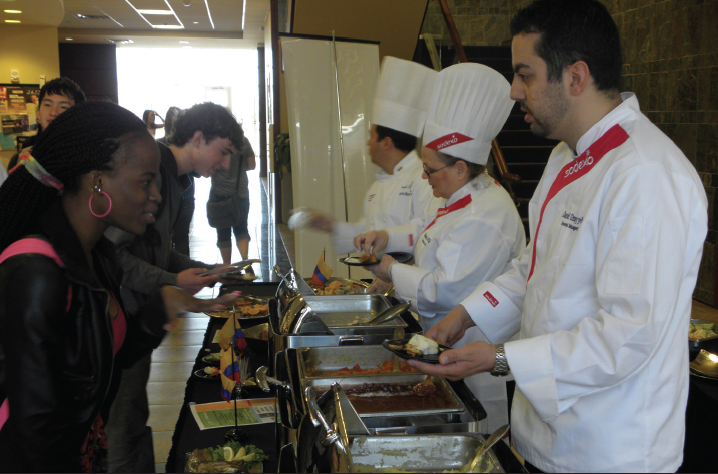 According to the Sodexo Global Chef Website, the program started in 2003 based on Sodexo’s commitment to providing customers with the highest quality of service using the company’s most valuable resources: its chefs.

Chef Suarez has been cooking for about 20 years and has been in the Global Chef Program for over six years. He said he draws his inspiration from his love for food.

“Food inspires me to cook,” he said. “Food unites people. It unites the things you do in the kitchen with the time you spend with your family.”

Chef Suarez hopes his country can be seen in positive light such as for the food rather than for negative issues.

“Coming from a country where you see a long list of negative things, I feel it is time to change the perspective of what people think of my culture and my country,” he said. “My country and my culture are wonderful, and that is something to share.”

There was a food-tasting event during lunchtime on March 5 in the McMahon Centennial Complex food court. The samples served included grilled guava chicken, mashed potatoes, tilapia and red beans.

The next day marked the finale of the Global Chef program at CU, with grilled strip loin, whole tilapia, baby octopus ceviche, barbeque guava pork and Bandeja Paisa served for lunch in the cafeteria.

According to Daniel Ghrayyeb, General Manager of the Sodexo Food Service on campus, the Sodexo kitchen staff helped Chef Suarez in preparing the masterpiece meals.

Ghrayyeb said that one person that stood out was Chef Debbie Wilson.

“Chef Debbie has been with Sodexo over 30 years and was recently appointed the Executive Chef position,” he said. “She trained in Chicago with the chef a few weeks ago to be able to help cook the meals.”

“Debbie has a huge commitment to the university and the students,” he said. “She works long hours to make sure everything is running smoothly and that the students are happy.”

According to Chef Wilson, she loves to cook. She started working for Sodexo in Plainview, Texas, where she put in 10 years. She then transferred to CU, where she has been ever since.

Chef Wilson said she likes to see students happy. She has taken the role of “Mom on Campus” for many of the students.

“I like to see their [students] faces when they are happy,” she said. “I just like to be everybody’s mom away from home.”