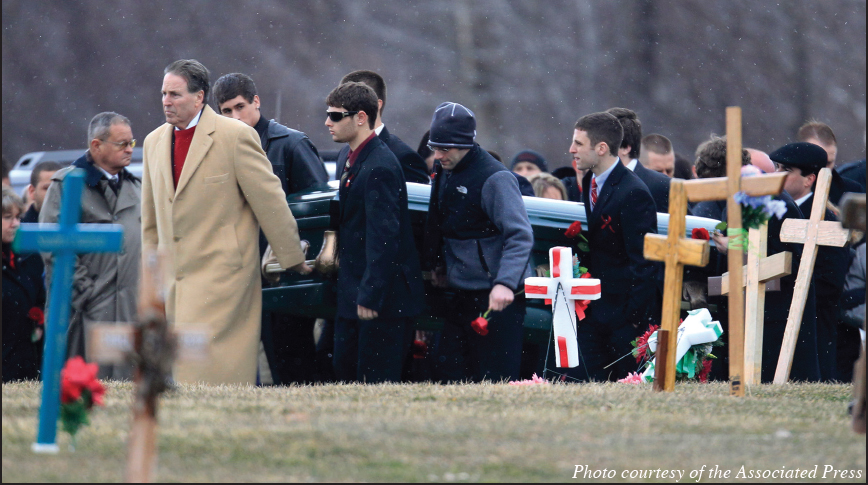 After the school shooting at Chardon High School, many of the comments in several of the news articles I read covering the shooting followed the same train of thought: “What have we as a society done wrong,” “Prayers to the victim,” “This is what we get for not paying attention,” et cetera.

Not paying attention is exactly what happened, though not in the way the comments would suggest.

Evan Erasmus, a student at Chardon, told Cleveland’s Channel 5 that he saw a fellow student’s tweet that T.J. Lane, the shooter, was going to bring a gun to school; however, Erasmus didn’t take the warning seriously.

There is also a “concerning” Facebook post on Lane’s account that news outlets are circulating that ends in “Die all of you,” a pointed ending that the outlets are latching onto and exclusively focusing. However, after reading the full post, one would hardly think it was a sign of him being troubled.

I see people posting deep and dark stuff on Facebook all the time, and the content is usually either poetry or short stories, not a sign of imminent murder. Lane’s post was not exactly uncommon to Facebook, and the media is just grasping at straws to perpetuate the notion that he was a “troubled teen.”

Does this mean we should now report that someone is troubled if they are posting a deep, artistic story on a social site? As far as I am concerned, no one would know if Lane was troubled just looking at his dramatic Facebook rants.

The only thing that society has done wrong is not pay attention to a threat. We did not fail at making sure the shooter did not carry out this crime or easing his pain (although if someone reached out him it could have probably been prevented). All society has failed in is not actually reporting a potential threat.

Lane may have had a rough home life, but is bringing a gun to school and shooting five of your peers the way to go about handling your problems? Is “wanting the world bow to your feet,” a good way of gaining respect? What he gained was not respect, but sadness and fear; the very fear that is prompting parents to question safety measures in schools.

The tragedy of Columbine High School increased the public’s awareness of the kind of threats troubled teens can pose. The fear-fueled response went so far that in one case, a seven-year-old girl was suspended for bringing a plastic knife to school. The knife was only in her bag because her mother thought she needed help cutting her lunch.

In response to shootings, schools have increased security, having city police patrol the hallways and installing metal detectors at the entrances. Although it would appear that these measures made it more difficult to sneak weapons into school, not everyone got checked.

Police patrolling the school became familiar with the students, and were supposedly able to pick out the good students from the constant troublemakers. Familiarity can be a great strength and security, but it can also be a glaring weakness. Vanguards simply cannot just allow their intuitive judgment of good or bad to decide who gets checked.

On the other hand, not every student can go through the metal detectors every day just to keep schools safe. The time it would take to inspect every student would keep students from class. Still, we must keep seeking effective ways of preventing school tragedies like Chardon.

In a world where social media is now stronger than ever, nothing is truly private now. If you post it on Facebook or Twitter, people will share it, and possibly take things out of context.