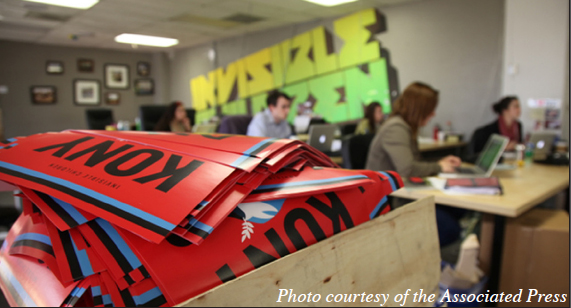 At this point, I am certain that much of the Cameron University population has become familiar with the Kony 2012 video and campaign, and perhaps my response is untimely and outdated, but based on the enormous amount of both critique and support I’m willing to count on continued relevancy.

For those who have not been graced with waves of Facebook video shares, here is a brief synopsis: Kony 2012 is a video that Invisible Children, Inc. launched to YouTube in order to raise awareness of Joseph Kony, the leader of the Lord’s Resistance Army (LRA). The overall purpose of the video is to gain support in stopping Kony via arrest and to gain financial support for groundwork in Central and Eastern Africa.

So, what’s the issue? Is this not just a typical Invisible Children “Lets save the world, particularly underdeveloped areas” attempt? Well, the issue rests differently with different people. While the matter is a non-issue for many supporters, for the group of individuals refusing to back both Invisible Children and President Obama’s October 2011 decision to send troops to Uganda, it is an issue of misinformation.

I’ve come across several articles criticizing the Kony 2012 video for a perceived attempt at gaining support from ill-informed youth and middle-aged people starving for a new trend to tweet about. The simplicity of the video raises concerns that several supporters seem to just glance over. Invisible Children’s critics are asking pointed questions, such as where the raised funds are really going or how this movement could possibly positively affect Foreign Policy.

With all of this negative attention, one might ask: what the video is doing right? And to that I must reply simply: what it’s doing right is getting attention. Sure, you can call it the bandwagon effect — as a negative comment on my Facebook did — but there is nothing wrong with using the technology right in front of us to our advantage. I find it difficult to believe that Invisible Children founder and video creator Jason Russell, who has been gaining a large following since the organization’s creation in 2005, does not know what he is doing. The video is gaining attention; it is creating awareness and getting the right words into people’s mouths.

Sure, the video is the kind of simple, watery activism that does not fully inform an audience, but Russell is stopping no one from digging deeper. The problem starts when readers see what is popular and take a surface level dive into content with no intention of further research. I’m not saying that I think it is right to deceive an audience; I’m not even saying that was the video’s purpose. What I am saying, though, is that Russell may very well have played on the use of media and media literacy — or lack thereof — to create a desired effect.

I think it is fair to understand that the complexity of the LRA and the extent in which Invisible Children is trying to help will not fit in a 30-minute video. Kony 2012 may have been the organization’s plan to gain interest, creating a compelling story in an eloquent, artistic way so that those interested would read on; or maybe it was part of the plan to use a simply understood, powerful documentary to create a blind following. Whatever the reasoning, the video acquired over 75 million views with in the first week of it being live.

In my opinion, I think it is brilliant campaigning to use a medium so relevant to the demographic that Invisible Children is looking to get support from; whether positive or negative, people are talking about the issues. This is a 26-year-old war, and people are only now becoming aware of it. Sure, a criticizing Facebook comment was angry with all this, but when has awareness been innately evil? And the medium through which this message is traveling is certainly making the situation relevant to our culture.

Chris Blattman of Yale had his own opinion on the matter, which fit the spirit of the Kony 2012 movement.

“For all its weaknesses, Invisible Children has been more effective than any of us at raising awareness,” Blattman wrote, “and they may get us closest to the least worst action we can take.”

A different kind of campaign: Posters are being prepared for Invisible Children’s newest endeavor. The advocacy’s recent social media blitz has raised both awareness and controversy.