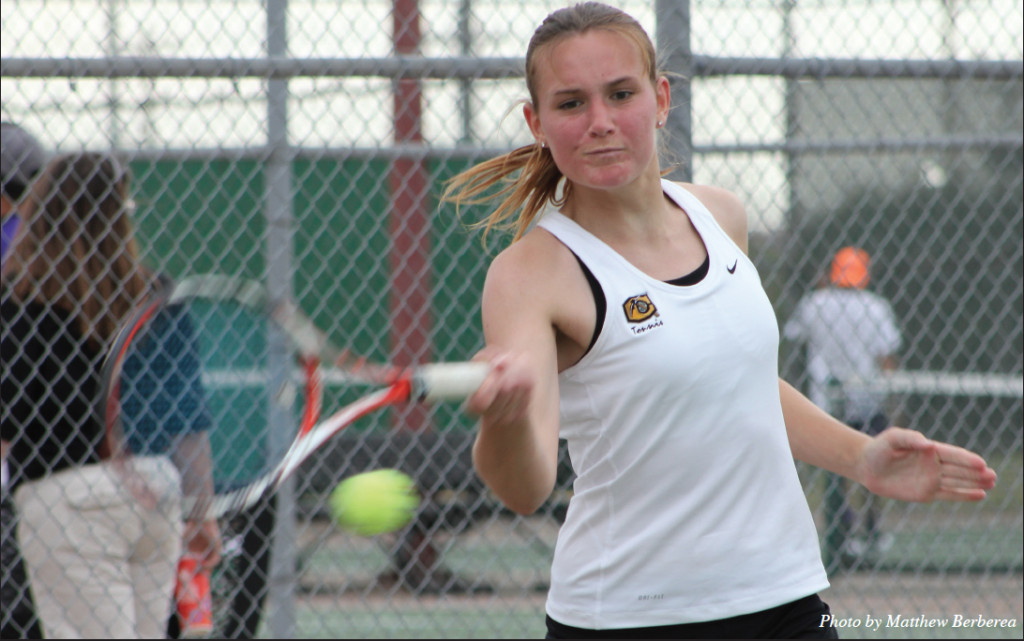 The Cameron Tennis teams continued their spring season on the road with matches in Maryville, Missouri and Topeka and Wichita, Kansas. The men and women’s team entered their road trip with strong spring records so far: 4-2 for the men and 4-1 for the women.

Both teams opened up on March 8 against the Northwest Missouri State Bearcats and both the Aggie teams secured victories with the women winning a decisive 7-1 match and the men securing a close 5-4 decision.

The ladies started strong with both the No. 2 doubles team of Sara Londono and Florencia Tornero and the No. 3 team of Elvira Sholles and Antonia Moberg securing victories. The No. 1 pair of Julia Puckhaber and Amanda Moberg dropped their doubles match 8-2 in what would be the women’s only loss of the day.

In singles play, Cameron swept Northwest Missouri with no sets dropped. Sholles made a particularly strong showing in the No. 4 slot winning her match 6-0, 6-1.

The men’s match started off 1-2 for the Aggies with only Gonzalo Garzon and Jorge Gerosi picking up a doubles victory in the No. 3 position.

The men turned it around in singles however, only losing two matches with Thomas Peixoto, Duje Janjic, Nicolai Ferrigno and Jorge Gerosi all achieving wins at the No. 1, 2, 3 and 6 spots respectively. This singles performance allowed the men to secure the victory 5-4.

The men and women continued their Missouri trip the next day as both teams took on the Drury University Panthers on March 9, with the women pulling through with a 5-3 victory and the men ending with a close 6-3 defeat.

The men only found a doubles win in the No. 2 position from Ferrigno and Campos. With momentum in Drury’s court, the Aggies were unable to come back in singles play with only Janjic and Gerosi managing three set wins at No. 2 and No. 6.

On March 10, the Aggies continued their road trip into Kansas taking on both Washburn and Newman Universities. The day ended with a 2-0 record for the both the men’s and women’s teams as they played well on the road.

Against Washburn, the women swept their opponents 9-0. They continued their success later in the day defeating Newman with a final score of 8-0.

The men mirrored the result of the women and only dropped one game against Washburn, securing the victory 8-1. Cameron managed a sweep against Newman on the men’s side winning 9-0.

Cameron returned home the next week to take on Abilene Christian March 15, at Streich-Henry Tennis Complex. Both teams fell to the nationally-ranked Wildcats with the men losing in a tight 4-5 match and the women in a 1-8 defeat.

The Cameron men took an early lead in doubles play, securing two wins from Peixoto and Garzon playing at the No. 2 position and Janjic and Lencioni playing at No. 3. However, the men fell in all but two singles matches to allow the Wildcats to take the win.

The Aggie’s women failed to find a win in the doubles arena with all three Cameron pairs succumbing to Abilene Christian. For singles, despite tough matches from the women, only Puckhaber secured a win at the No. 2 position against Micah Hermsdorf.

“Julia played really well,” said Coach Helvey. “Hermsdorf is a tough player and one of the top players in the nation, so Julia’s win over her is going to help her ranking.”

Overall, Coach Helvey’s focus is on the remaining matches of the season.

“Now we have to put the matches behind us,” said Coach Helvey. “We have a week of tennis ahead of us, so that has to be where our focus is now.”