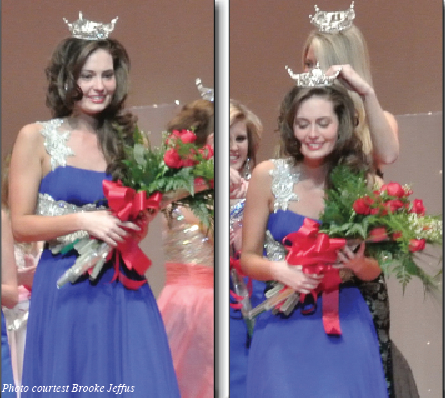 Cameron University is home to yet another queen.

Brooke Jeffus, a senior majoring in Interdisciplinary Studies and Biology, was recently crowned Miss Lawton. The journey to being crowned Miss Lawton, according to Jeffus, started a month before the pageant, which was held on Feb. 12 at the McMahon Memorial Auditorium.

Jeffus competed against seven other  young women from Lawton.

According to Jeffus, the phases of competition included: private interview with the panel of judges, on stage question, physical fitness in swimwear, talent and evening gown.

Jeffus said although she felt a bit tense, she enjoyed the experience.

“The experience was great,” she said. “I felt a little nervous, but mostly I was having fun”

According to Jeffus, the judges looked for people who had confidence in themselves and their abilities. This confidence is what brings out the best in the contestant.

Jeffus said the pageant is different from what the media portrays.

“The pageants associated with the Miss America Organization are nothing like what you see in the movies,” she said. “We all have a lot of fun together and encourage each other. All the girls were so nice.”

“When you win a title that is part of the Miss Oklahoma Organization, the work doesn’t stop the minute you are crowned; that is just the beginning,” she said. “Having a title gives you the opportunity to really be involved in the community you represent.”

Jeffus said she is honored to have the opportunity to represent the City of Lawton and Cameron University at the Miss Oklahoma pageant in June.

She also plans to give back to the community through volunteer work and promotion of her platform, “Engaging Girls in Science.”

Academic work is still very important to Jeffus. She credits her professors for being considerate.

“So far, I have adjusted well and have been able to find a balance between getting my school work and studying done as well as traveling to Tulsa and OKC for meetings, appearances and preparation for the Miss Oklahoma pageant,” Jeffus said. “I have fantastic teachers here at Cameron who have been very understanding about the busy schedule.”

According to Jeffus, she is thankful for the support she had throughout the pageant.

Jeffus said her family encouraged her a lot.

“My family was a huge support while competing, especially my mom and sister,” she said. “Also, the members of the board and the director of the Miss Lawton pageant, Jerry Hickingbottom, have been so great to work with.”

She also thanked her friends at Cameron University and all those people who came out to support the pageant.

Jeffus said although she’s only had the title for a few weeks, she’s eager to make great memories.

“Well, I’ve only had the title a few weeks, but I know throughout the next year I am going to make wonderful memories, especially at the Miss Oklahoma pageant,” she said.

The Miss Oklahoma Pageant will take place June 5-9 in Tulsa.