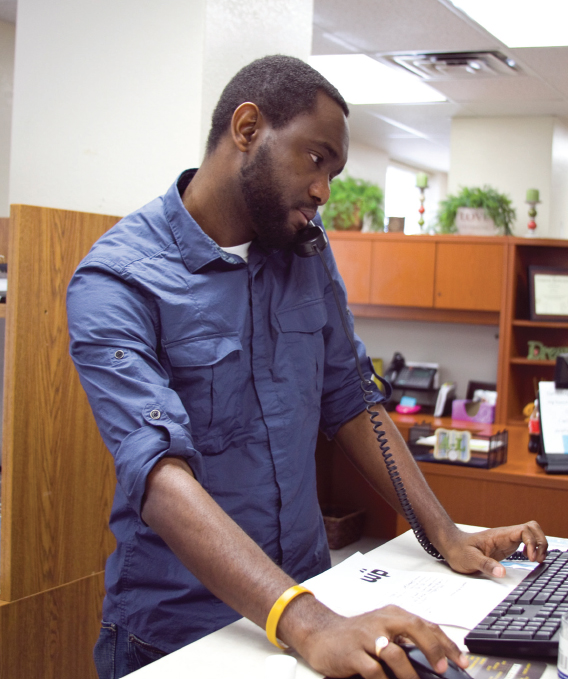 Cameron University’s student workers have managed their courses while still working at on-campus jobs meant to prepare them for work outside of school.

According to Student Employment Coordinator Debbie Kightlinger, student positions for on campus jobs range throughout all of the departments, giving students several choices of what to choose from.

“There is such a variety,” Kightlinger said. “Every department has student workers, ranging from the president’s office to the theater to the Fitness Center, and the library hires several students as well. Each department basically has some kind of work study program, whether it be federal, state or auxiliary funded.”

“They can go to aggieaccess. com, and on the ‘my info’ tab they can find a listing of all the jobs that they can currently apply for, with descriptions and requirements for each position,” Kightlinger said.

The hiring process, according to Kightlinger, is very similar to jobs that can be found outside of CU.

“We like to make it more like the outside, off-campus positions,” Kightlinger said. “They fill out an application, take it in and get called back for an interview, going through the hiring process. It’s a good experience and we try to place as many students as we possibly can.”

According to Kightlinger, the experience of a job on campus trains students for their post-school careers.

“Students are able to get on-the-job training that can hopefully help them in the outside world and in life,” Kightlinger said. “They can build a portfolio of experience and references.”

Kightlinger said that despite other’s views on student workers, the jobs on campus are similar to jobs found off campus.

“Lots of people in general do not think that student employment is like a real job,” Kightlinger said. “It is a real job, though. You are hired and you can be fired, too. It pays more than minimum wage — Right now it pays $7.50 an hour.”

According to Kightlinger, the

pay system for CU student workers is through direct deposit, in which the workers can set up their own methods of payment.

“We’ve gone to direct deposit at Cameron,” Kightlinger said,” They have the choice of their pay going to the Aggie OneCard or to their checking or savings account.”

According to Kightlinger, students who take night classes can also arrange work hours either during the day or after hours.

“We have some students taking night classes who want to work during the day,” Kightlinger said. “A lot of time could also be worked in the library or book store after hours. Hours must not overlap or interfere with class. Students work out their hours with their employers based on the classes they are taking.”

One student worker is undeclared freshman Donny Williams, who works the ITV feeds at the CU Duncan campus.

According to Williams, the on-campus job works with his class schedule and keeps him busy.

“The job works well around class,” Williams said. “I generally get at least 16 hours at work every week.”

Williams also said that the job offers other benefits.

“The people I work with make the job more fun,” Williams said.