The nomination process for the Cameron University Choice Awards began this month in preparation for this year’s Service Recognition Reception and Dinner on April 17. The annual awards, which began in 2009, are given in four different categories related to Cameron University’s “Plan 2013: Choices for the Second Century.”

Vice President for Business and Finance Glen Pinkston is the official spokesperson for the Cameron Choice Awards. Vice President Pinkston said the awards play an important bridge between Plan 2013 and the things happening on campus.

“It reinforces that our five-year strategic plan wasn’t just a paper exercise,” Vice President Pinkston said. “It’s something that has guided our decisions.”

The awards are given in four different categories, each specifically tied to a different outlined goal. Award recipients will be honored at the reception on April 17 with a plaque and $500 stipend. Any staff or faculty member who has been employed at least a year at Cameron is eligible for nomination, with the exception of members of the Executive Council.

Vice President Pinkston said that students have an important role both in Plan 2013 goals being met on campus and the staff and faculty involved in fulfilling those goals.

“Students can help us recognize the people that they see making this happen,” Vice President Pinkston said.

Previous recipients of this award have been Marcella Gustafson, International Students Admissions Coordinator in 2011, Deanice Shegog, Student Services Counselor in 2010 and Zeak Neifeh, Director of Student Activities in 2009.

In past years, winners of this award have been Terry Hacker, Carpentry foreman in 2011, co-winners Jenn Abel, Staff Assistant to the Director of Special Events, and Dr. Leon Fischer, Professor and Chair of the Department of Agriculture in 2010, and co-winners John French, Grounds Foreman, and Dr. Anton Wohlers, Assistant Professor of History and Government in 2009.

The third award is “The Partner of Choice Award” which relates to goal four of Plan 2013 and the nominee who has expanded Cameron’s partnerships with the community and Oklahoma area.

Winners of this award have been Dr. Courtney Glazer, Assistant Professor in the Department of Education in 2011, Dr. James Lambert, Professor and Chair of the Music Department in 2010, and co-winners Don Aguilar, Associate Professor and Chair, Multi-Media Design, and Arun Tilak, Assistant Director of the Center for Emerging Technology and Entrepreneurial Studies in 2009.

Mr. Gaines spoke about winning the award, how much of a surprise it was for him and how the awards play into the overall mission of Cameron.

“It’s nice to be recognized by your peers as a good instructor,” Gaines said. “It’s nice that they’ve got these awards that target specific goals for the university and that they recognize specific individuals working towards those goals.”

Vice President Pinkston stressed the importance of putting care into the nomination process in order to increase the nominee’s chances of winning the award.

Any Cameron student or employee may submit nominees for any of the awards, and forms for nominations can be found online at http://www.cameron. edu/forms. Nominations must be turned into the Human Resources department in the Administration Building by 12:00 P.M. on March 29. 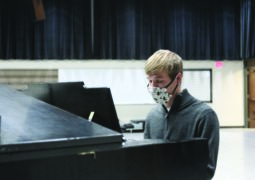 Things to note about the Music Department 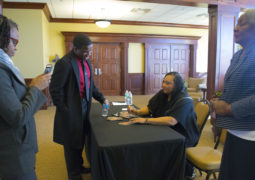 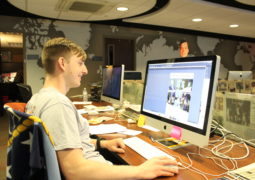