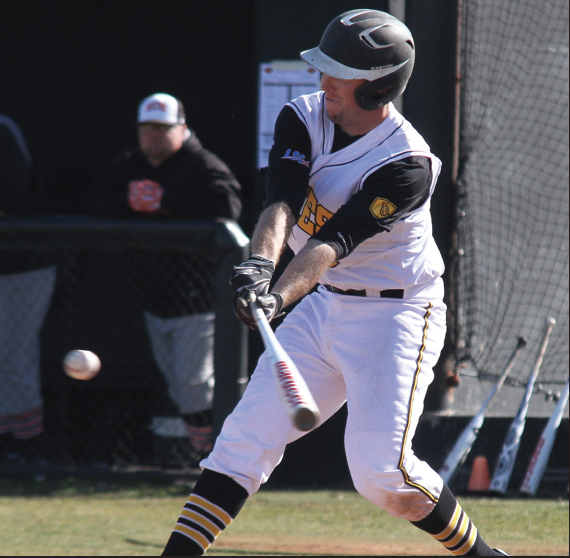 The Cameron University men’s baseball team ended the month of February with a 2-1 series over University of Arkansas Fort Smith at McCord Field.

Game one for the Aggies came to a close at 6-2 after nine innings. The Aggies showed how dominating the lead would be throughout the game as they scored three runs off four hits in the first inning.

Tyler Cox stepped to the plate with men in scoring position. Cox would drive in two runs as a single shot out to the left side brought both Andy Garcia and Josh Dawson across the plate. In the meanwhile, the Aggies loaded the bases for Benshell Garcia to step into the box. Garcia made his way to first after ball four came in and advanced Brad Blumer to score for the last Aggie run of the inning.

The Lions started plated the first of their two runs in the top of the second inning. Christian Allen reached for the Lions on an error committed at second. Gordon Miller then stepped up to the plate and shot a double up the middle to center to bring Allen around to score.

The Aggies led 3-1 after the bottom of the third, in which they plated no runs.

The fourth inning was a different story as the Aggies brought two more runs across. With Garcia back on base as well as Kevin Lum, Taylor Lyons drove a single up the middle and both Garcia and Lum rounded third to score after both men reached on errors.

Going into the top of the fifth with a score of 5-1 the Lions had runners on the corners as Ben Smith stepped in and hit into a double play but was still credited with an RBI as Nick Gumm, who was on third plated the second and final run for the Lions.

The CU men did not score again until the bottom of the eighth when Kevin Waukau swung for the fences and homered over the centerfield fence, sealing the win for the Aggies and the final score of 6-2.

Wade Myatt was on the mound for the Aggies and pitched eight of the nine innings for the Aggies. James Rhodes replaced Myatt in the top of the ninth and close out the game for CU.

With momentum behind them, and Clay Vanderlaan on the rubber, the Aggies headed into the second game of the day ready for another CU win. And a win was exactly what they walked away with.

The Aggies played the second game to seven innings and walked away victorious by a score of 13-2.

“Our pitching was unbelievable,” Holland said. “Wade and Clay gave really great outings, and I am really proud of them.”

On the offensive side for the Aggies, Josh Dawson reached on an error at second and was brought around in only a matter of minutes to start game two off with a bang. Blumer ripped a single into right field, which scored Dawson and put an RBI into his stat line for the day.

The two runs the lions scored were both tacked to the scoreboard in the top of the fourth when the squad’s designated hitter reached on an error allowing Austin Rawls and Thomas Shaddy to score.

The Aggies came out bats blazing once again in the bottom of the fourth to produce six runs on four hits and one error. The team would seal the deal in the top of the fifth when Lum scored as Smith reached on an error committed by the third baseman.

Day two of the series was a different story for the Aggies.

The men tasted defeat as the Lions came out on top with a win over the Aggies, 4-9. The Aggies would end the day with eight hits and four errors.

Coach Holland said it was interesting to see how the team reacted to less production at the plate compared with the previous two games.

“We could have easily won that game,” Holland said. “We looked good at the beginning, but just kind of fell off. Yesterday, we got hits when we needed them. Today, though, we let them take over.

“All our guys try hard and work their tails off, but we just have to get better at performing at a high level day-in and day-out, and that’s hard.”