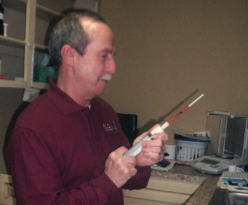 A new law may soon be in effect that will make pseudoephedrine, commonly known as Sudafed, a prescription drug.

Pseudoephedrine is a key ingredient in methamphetamine (meth), an addictive stimulant that affects the central nervous system. Methamphetamine abuse had died down for a while in the area, but according to Comanche County Sheriff Kenny Stradley, the drug is making a comeback.

“For a while we had it slowed up (meth production), but here it comes again,” Stradley said. “It’s coming back.”

According to Agent Chris Smith, agent in charge at the Lawton branch of Oklahoma’s Bureau of Narcotics and Dangerous Drugs Control, there is already a policy in effect that restricts the amount of pseudoephedrine that an individual can purchase.

“There is a nine gram limit on the amount of pseudoephedrine you can buy within any 30 day period,” Agent Smith said.

According to Agent Smith,
the new legislation was proposed with two goals in mind. If passed, officials expect to see a decline in the amount of methamphetamine that is produced, and they are also hoping to stop individuals from engaging in a pseudoephedrine-buying scheme known as smurfing.

According to Sheriff Stradley, “smurfs” are people who procure the materials needed to produce methamphetamine, specifically pseudoephedrine.

“Smurfing is where a group of individuals get together and they go out and get Sudafed to make dope, then they bring it back to a cook,” Stradley said. “For their part in getting the Sudafed they get some of the dope or they could get some [meth] and sell it to make money.”

According to Elgin Discount Pharmacy Pharmacist Mark Beevers the amount of Pseudoephedrine that is used to create meth is surprisingly high.

“90 percent of the pseudoephedrine medicine produced in the U.S is turned into methamphetamine,” Beevers said.

According to the National Institute on Drug Abuse’s webpage, the effects of Methamphetamine addiction vary, ranging from anxiety to paranoia. However one of the lasting effects is perhaps the most alarming. Studies suggest that, “…long-lasting and even permanent brain changes may result from methamphetamine abuse.”

According to Clinical Director
of Roadback Incorporated Nivian Rozumialski, methamphetamine addiction affects every part of a person’s life.

“When addiction takes over, it takes over everything,” Rozumialski said. Roadback Inc. is an organization

based in Lawton that offers assistance to those who are struggling with a drug addiction.

“Our mission is to provide help and hope in recovery,” Rozumialski said.

For those who suspect that a friend or family member may be abusing methamphetamine or other drugs,
it is preferable that the person be confronted, without feeling that they are being judged, Rozumialski said. She offered advice to those struggling with this task.

“Be very understanding and compassionate with that person and ask if they want help,” Rozumialski said.

According to Rozumialski, recovery from drug addiction cannot begin until an addict is willing to accept assistance.

“If they want the help, and are ready for the help, then we can start working with that person,” Rozumialski said.

Rozumialski explained that in some cases, well-meaning friends and family members could inadvertently make a drug addict’s situation worse by not addressing the problem. In those cases, that person may be enabling the addict to continue to engage in substance abuse.

“An enabler is one that is helping that addiction by trying to avoid the fact that this person is a drug addict or an alcoholic,” Rozumialski said.

According to Rozumialski, Roadback Inc. is a good place to turn if someone is struggling with drug addiction, and is ready to accept help.

“Help is always there and we’re not here to criticize you or judge you,” Rozumialski said, “there is help, and there is hope.”

For more information on Roadback Inc. and the services they offer, individuals can call 580.357.6889.