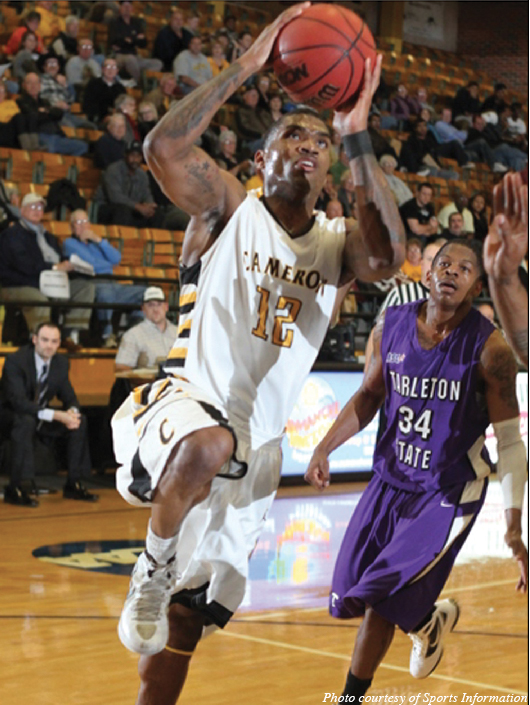 The Aggies fought hard this past week to regain their status in the Lone Star Conference.

The Cameron Men’s basketball team flew solo as they played the Bacone Warriors Monday, Jan. 23, in the Aggie Gym without their girls’ team. The Aggies earned their place back in the winner’s bracket after crushing the Warriors 85-47.

Cameron stole a 14-1 lead right off the bat, forcing Bacone to step up their game or get left behind. The Aggies headed into the locker room at half time holding almost twice the score of the Warriors, 35-18.

“We just wanted to play hard and do the things we are supposed to do… We did that tonight,” Coach Alexander said. “We have not been doing that the last couple of games. We had an 8-game winning streak going; we would like to get another 8-game, or more, going.”

Cameron battled Tarleton State, ranked fourth in the nation, Wednesday, Jan. 25, on the Aggies’ home court. The Black and Gold went into the game focused on proving themselves against one of the best teams in the country.

“When you play a team like that, it is going to be the team that plays perfect that will win. We played almost perfect,” Coach Alexander said.

The Aggies battled the Tarleton Texans in an effort to cause an upset in the conference and show that they are a force with which to be reckoned. Unfortunately, the Black and Gold fell to the Texans in the final two minutes of the game, leaving the scoreboard to read 65-62.

Tarleton was the first to score at the beginning of the game, but the Aggies refused to let the Texans take much of a lead. For every basket their opponents scored, the Black and Gold came back with a basket of their own.

In the second half of the game, the Texans showed why they are nationally ranked, stealing a lead and driving the score to a 12 point lead with 11 minutes left in the game. The Aggies were able to fight back and close the lead in the final minutes. Coach Alexander was satisfied with the effort put forth by his team.

“One area we improved that we have been working on was rebounding. We did a lot better job of rebounding and did not turn the ball over very much,” he said. “But we did not defend nearly as well as we needed to.

“They (Tarleton) also just jumped up and made some shots. They have the ability to work the clock to 10 seconds or so, take a shot and make it. That makes a team tired, trying to defend that.”

The Cameron Aggies hit the road Saturday, Jan. 28, to play Texas A&M Commerce on their home court. The Black and Gold fought to regain their place in the winner’s bracket.

The Aggies fought with all their might to triumph over Texas A&M Commerce, but struggled on executing their plays, losing to the Lions 76-69.

Coach Alexander was disappointed in the performance of his team and their inability to follow through with their game plans.

“We have struggled the last couple of games on executing,” he said. “It really showed tonight. It is coming down to teams that have to win to get into the playoffs.

“They are must-win games, so we are getting everyone’s best. We need to come out and listen better and execute better or it is going to be a rough stretch of games.”

The first half of the game proved rough for the Aggies as both teams traded baskets. The Lions stole the first lead, but the Black and Gold fought back and gained a one point lead over Texas A&M Commerce as they headed into the locker rooms at half time.

The Aggies stuck close with the Lions throughout the second half, but when the 11-minute mark hit, the Lions took off, leaving the Black and Gold in the dust.

The loss keeps the Cameron men’s team in third place; however, they are now tied with West Texas A&M and Incarnate Word, both teams who lost to the Aggies earlier in the season.