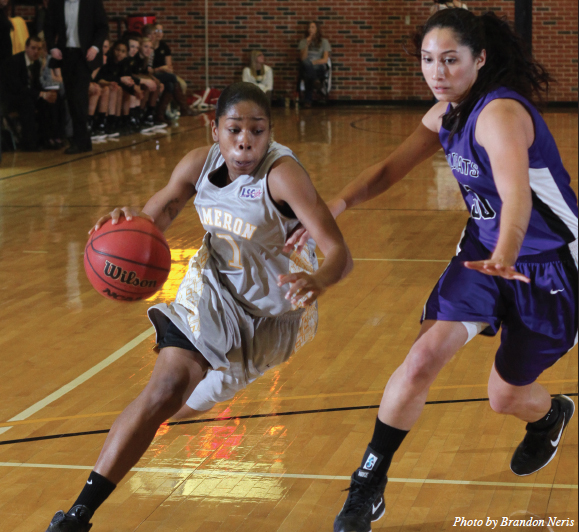 The Lady Aggies fought hard this past week as they took on two very good teams.

The Black and Gold hit the road on Wednesday, Feb. 1, as they journeyed to play San Angelo on their home court.

The Lady Aggies battled their way on the court, determined to claim victory. Unfortunately, Cameron fell short one point in overtime, losing to the Rams 54-53.

The Black and Gold seized control of the ball in the first half, dropping baskets in the hoop and refusing to let San Angelo take the lead. The Lady Aggies cruised into the locker room at half time with a 25-23 lead.

The home team came out aggressive in the second half, and the teams traded leads early on. Cameron took advantage of the weaknesses in the opponent’s defense and pulled ahead, snatching a seven point lead with a quarter of the half left in play. San Angelo saw the lead as a challenge, and fought for the win.

They locked down the Lady Aggies, preventing them from scoring another basket. During this lockdown, the Rams scored seven points of their own, equalizing the scoreboard in the final minutes of the game.

Going into overtime, the Black and Gold pulled ahead in the first 20 seconds. The Rams retaliated by stealing the lead, forcing the Lady Aggies to work harder. Cameron regained the lead thanks to Junior Alexis Williams’ clutch three-pointer shot. Unfortunately, the remaining two minutes of overtime did not go in favor of the Black and Gold.

Head Coach Tom Webb was disappointed in the performance of his team in overtime, as well as throughout the entire game.

“We got the lead in overtime and just did not execute,” he said. “We gave up some easy baskets, and it hurt us. Offensively, we did not do much. We struggled to get the ball inside … but it was really the offense in general. It was hard for us. As a whole, it was a pretty ugly game.”

He said that the defenses were equal during the game, cancelling each other out, forcing the game to come down to execution in the end.

The loss dropped Cameron into fifth place in the Lone Star Conference (LSC). Coach Webb said that it is a very competitive conference, and the team does not have slip up room.

“Number one, we have just got to plug away,” he said. “It is a long conference season. We (teams in the LSC) are playing for the same thing: a good play-off seed.”

The Lady Aggies faced Abilene Christian in the Aggie Gym on Saturday, Feb. 4.

The Black and Gold executed pristine rebounding and their trademark defense, taking the victory over the Wildcats, 58-54.

Cameron came out firing in the first half, working to redeem itself from the loss earlier in the week. The Lady Aggies headed into the locker room at half time with a lead over Abilene Christian.

The second half was no picnic for the Black and Gold. The Wildcats came back for revenge over the first half, stealing the lead for the majority of the second half. Cameron took advantage of its opportunities, and after receiving an early technical foul sophomore Ali Brown posted four points and seven rebounds, assisting the team in outrebounding the Wildcats 48-33 in the game.

Coach Webb was pleased with the defensive teamwork on display.

“We are athletic. We are really long and we have bought into the defensive philosophy as a team,” he said. “When that happens, you can be good. It is all the team, their time, their work, their deal.”

The triumph for Cameron gave the team its 10th conference victory, tying the school record set in 2001-2002. Coach Webb is still aiming to improve the team’s dynamic.

“We just tied the record for the most conference victories in school history,”  he said. “But, we are really trying not to worry about anything except for today. That has been good for us. We have three keys we still need to improve on: execution, more bench play and growth … and staying fresh and excited. We need that to be better too.”