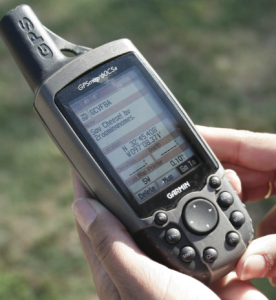 The practice of outdoor treasure hunting has gone high- tech and goes under the name: Geocache.

Geocaching is a treasure hunting game in which participants go outside and search for hidden containers, called geocaches, using their Global Positioning Systems (GPS).

The GPS takes them close to where the geocache is, but it is up to the hunter to look around the area and find the container.

Once found, the participant can write their name and date on the log book inside the geocache.

After the geocache has been found and information has been written, it is advised to put the geocache back where it was found so other participants can find it.

Geocache is being played all around the world. According to geocaching.com, there are over 1.5 million active geocaches and over 5 million geocachers worldwide. Dave Ulmer, a

There are at least 5,719 geocaches in Lawton. Whether day or night, participants can search for these geocaches whenever they want; they can even use the GPS in their cellphones.

“I heard about geocaching last spring from my boss,” McKean said. “He told me that I would be interested in it.”

McKean started geocaching, but stopped around August of last year.

Recently, though, she remembered about geocaching and how much fun the experience was, so she decided to pick it up again with some

friends.
“The last time I geocached

was last weekend,” McKean said. “I had a few caches that were really hard to find but I had five successful finds. I would recommend it to anyone that seems up to a fun little treasure hunt.”

McKean went out at night and started to search for geocaches. She didn’t care if the weather conditions were windy, all she wanted was to find the geocache and challenge herself for the next find.

“It’s so much fun to search for them,” she said. “I want to find some of the harder ones. Also, I think it would be awesome to go to another city to do one.”

Geocaching is everywhere, and anyone looking for a challenge can join.

Participants can go online and find geocache coordinates, and there are also free applications available on cellphone markets

to get started. It’s easy to start finding the hidden treasure and have fun with the world of geocache.