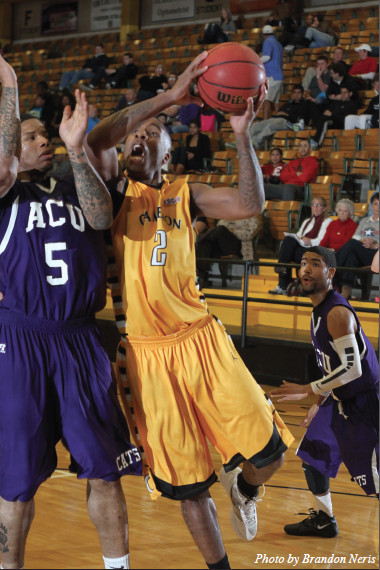 On Wednesday, Feb. 1, the Black and Gold traveled to San Angelo, Texas to face the San Angelo Rams. The Aggies clawed their way to a victory, beating the Rams 56-52.

The Aggies came out fighting and refused to let San Angelo pull ahead. Both teams headed into the locker room at half time, with the Aggies clenching a four-point lead, 25-21.

The Black and Gold continued to control the pace and hold the lead in the second half. About halfway through, the Rams pulled within two points of the Aggies, but failed to edge their way any closer. Toward the end of the half, the Rams stole control of the ball, trailing the Black and Gold by three points; however Cameron maintained a strong defense and rejected any attempt San Angelo made to score.

Head Coach Wade Alexander was proud of the way his team executed their defense.

“We practiced hard on it all week,” he said. “We finally played good team defense. We were able to play at the speed we needed to, especially since we were in foul trouble. It was a total team effort.”

The Black and Gold triumphed over Abilene Christian on Saturday, Feb. 4 in the Aggie Gym, dominating the majority of the game and ending with a score of 77-65.

Coach Alexander was pleased with the offensive performance of his team.

“The number one thing was that we took care of the ball,” he said. “We only had six turnovers for the game. Also, a lot of the guys stepped up tonight.”

Cameron had a lot of drive as they started the first half of the game. Their momentum carried them in the locker room at half time with Jonathan Patino scoring a fade away three-pointer as the clock expired at the end of the half.

The Aggies played equally strong in the second half, outscoring the Rams 45-36 points.

Coach Alexander was again pleased with the way his entire team played offensively.

“On the offensive end, we were just executing really well,” Coach Alexander said. “Plus, this is two games in a row where Milt (Garner) was in foul trouble. But tonight, we were fine without him out there, and able to get things done.”

The Aggies presented impeccable teamwork and played on the strengths and weaknesses of each player. Coach Alexander said that in the locker room they had discussed contributing anyway they could. He said that his team did exactly that and that everyone put forth great effort.

The back-to-back wins allow Cameron to maintain its hold on third place in the Lone Star Conference standings.

Coach Alexander said that he is excited to have his 6’8” forward, Vinicius Telo, return to the court next week. The Brazilian native led the team in scoring 18 points per game prior to going down with an ankle injury.

“That’s going to give us some post play that we are missing,” he said. “That will also give the rest of our guys a confidence builder knowing we have another weapon. He is coming back at a good time. We were playing well without him, but I think we can play better with him.”

Coach Alexander said there is always room for improvement on the court, but he is happy to have his team all strong and healthy again.

“While we are clicking right now, when we add Telo, we will need to learn to make that click for us again,” he said. “We are playing well at the right time of the year, but the main thing is to stay healthy and continue to improve.”