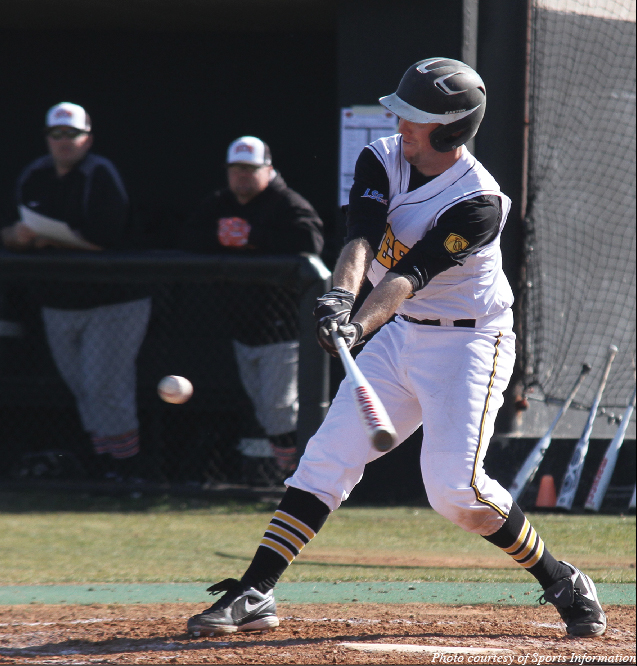 The Cameron Aggies Baseball team has taken off on a great start after opening day at McCord Field against East Central University.

The men played a doubleheader, which was slated to be two 7-inning games due to the field not having lights. The first of the two games was but singles for the Aggies, who would go on to win the game in extra innings by a score of 6-5.

Coach Todd Holland said he was glad his team won, but that there were things the team needed to work on, one being the amount of errors that occurred throughout the game.

“Josh Dawson committed two of those (errors), and one was a routing double play ball that let some runs in,” Holland said, “but that’s part of early season baseball.”

The Aggies took an early lead in game one, plating three runners in the first inning. ECU retaliated in the second inning by scoring one run, and again in the third with one more run.

ECU returned fire on the Aggies, plating three runners in the top of the fourth to bring the score to 3-5 Tigers. The Aggies found momentum in the bottom of the fourth, as both senior Taylor Lyons and sophomore Kaleb Brawner crossed the plate to tie the game.

The Aggies would go on to battle defensively against the Tigers until the game reached the bottom of the ninth, where junior Kevin Waukau would score off an error at third base after reaching on a walk earlier in the inning.

Game two was a different story for the Aggies as they went down in order in the bottom of the first, after ECU scored one run off four hits, no errors and left one on base.

The Aggies found a spark in the second inning. The team came out, bats hot, with a single up the middle from junior Nick Smith, followed by a double to left field by senior Benshell Garcia. Smith advanced to third, and would score on Kevin Waukau’s single hit to the left side, also advancing Garcia to third. Waukau would advance to second and once again to third on an infield error that would score Garcia.

Sophomore Brad Blumer would single up the middle to score Waukau. Next up to the plate was junior Tyler Cox, who would single to right, advancing Blumer to second. Blumer and Cox would both advance on Taylor Lyons’ sacrifice bunt. Junior Kevin Lum, next at bat, would pop up a sacrifice fly to left field, which would score Blumer for the last run of the inning.

Coach Holland was impressed with how the Aggies pulled things together to get things going in that second inning.

“It takes a while, sometimes, to get on a pitcher, and finally we got on to him,” he said.

Coach Holland explained that in order for the Aggies to keep up the momentum and keep winning games, they are going to have to be fundamentally sound.

“There are a lot more things in order for this team to win,” he said. “They are going to have do better on a lot of things.”

Holland went on to say that his Aggies are going to have to figure out certain aspects of their game in order to stay in the winning standpoint.

“They are going to have to do their bunts right, as well as run bunt coverage,” Holland said. “We cannot afford to give up runs and errors, so coverage is going to be our nemesis right now.”

The Aggies scored six more times, once in the third, three times in the forth, and twice in the fifth, before the game was called due to lack of light on the field.

The Aggies once again had three errors in game two, once in the third, once in the fourth and again in the fifth.

The Aggies will play their next home game on Tuesday Feb. 7 at McCord Field against Southwestern Oklahoma State, and will be on the road until Feb. 25, when they will once again play at McCord field against University of Arkansas-Fort Smith.