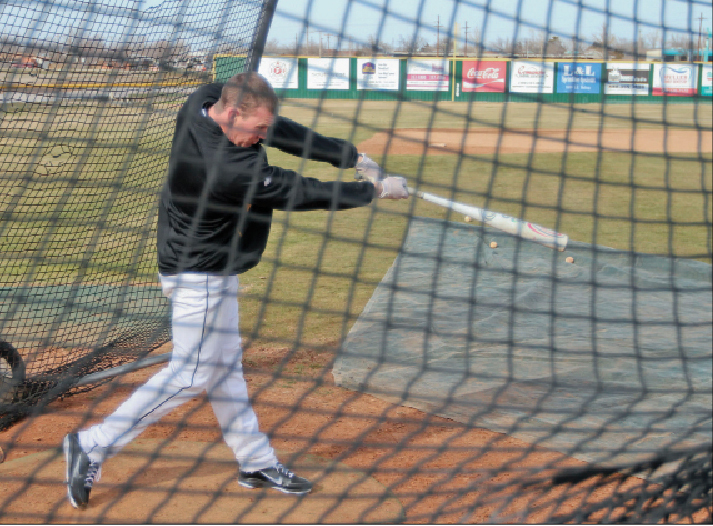 The Aggie Baseball team is gearing up for what looks to be an interesting season.

After finishing last season with a winning record of 33-16 Coach Todd Holland – in his ninth year at Cameron – is looking forward to seeing how his team’s dynamic progresses from the practice to the game setting.

Coach Holland said he started practice earlier this month and has been gauging just where his team will be before opening day at the ballpark on Feb. 1.

The Aggies have had to change their game plan for this year, Holland said, as they have lost two powerhouse hitters: Chase Larsson and Kenny Held.

“We don’t have a Chase Larsson or a Kenny Held that will step up to the plate and hammer you for a three run homerun every other at bat so we need to look at something different,” he said.

Coach Holland explained how the Aggies will have to switch up the game-plan a little to make this season one that will place them as a contender in conference play.

Coach Holland said this year he had to put together a team that is going to have to be fundamentally sound in order to be a contender just as every good baseball team should be.

“It’s going to be hard going from a team that hit homeruns every time to a team that is going to have to run some bases and become a more dynamic team,” Holland said.

The Aggies are going to have to take a defensive stance, Coach Holland said, in order to play to their full potential.

“There may be a lot more one run games when you don’t have those guys that step up to the plate and hit a homerun then all of a sudden you have a four run lead,” Holland said. “We are going to have to be on our toes and running some bunt coverage and make sure your defense is all lined out.”

Coach Holland took his fall season as his recruiting season, in which he would go and search for some players who could help build on his winning program.

According to Holland, the new pitching coach for the Aggies – Bryan Wyatt – has taken the role of preparing the pitchers that Holland finds, working on the fundamentals of their pitching.

“Brian is a pitching guy, and before him I would go look for guys that could throw strikes and fill it up and throw in the zone,” Holland said. “Now that I have Brian, I can go look for a guy that throws hard and that may be a little wild, and now we have someone here to work with them and get them more in the zone bit by bit.”

Coach Holland explained that he has a philosophy built up over his nine years at Cameron he abides by when it comes to looking ahead in his team’s season.

“The one thing I have learned from this job is not look forward to the future, but to take it one game at a time,” Holland said. “I understand that Conference play is going to be a grind everyday, and it is really just a matter of us staying healthy and if we can stay healthy then we should have a good year.”

The Aggies will start their season off Wednesday, Feb. 1 against East Central at McCord Field. For anyone seeking  additional information regarding the Aggie Baseball Team visit www.cameronaggies.com.